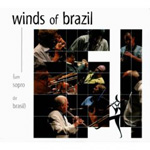 With strings and orchestral timbres accompanying them, a dozen Brazilian soloists took the stage in São Paulo during two nights in November, 2004 to interpret modern impressions of their country's folk tradition—each soaring high from deep within. This live performance comes with the lyrical beauty of traditional songs as well as heartfelt understanding.

Flutist Mauro Rodrigues blends with strings on a lovely ballad original that he aptly titled "Firm and Smooth. Trumpeter Joatan Nascimento and saxophonist Teco Cardoso romp casually on a classical piece called "Steel in the Piston. Both soloists return later with plenty to say. The concert places the soloists in various configurations. "Affectionate, for example, features four flutes and bassoon with harmonica, while "Sunset Star features tenor saxophonist Vinicius Dorin in a classical reading. Throughout the performance, the concert's chamber orchestra can be felt contributing its share of wealth.

As the album's title, Winds of Brazil, makes clear, the concert features woodwind and brass solo voices. Flutes, clarinet, bassoon and saxophones carry most of the session's solo lines as they offer impressions of the countryside. "Manha de Carnaval features trombonist Vittor Santos in a classical treatment of the familiar Brazilian anthem that resolves into a jazz jam by seven of the concert's stars.

Teco Cardoso's "Kenoma (April 21, 1500)" features the composer on several instruments, including the uruá, a double-piped flute from Brazil's folkloric ancestry. (The date refers to Brazil's discovery by the Portuguese.) Flowing and somber, the piece summarizes the meaning of this concert performance: to pay homage to Brazil's traditional music through heartfelt lyricism.

Firm and Smooth; Steel in the Piston; Affectionate; High Tide; So Much Song; The March of the Sounds; Amorous Flower; Morning of Carnaval; Kenoma (April 21, 1500); Mulatas, etc, and All; Sunset Star.