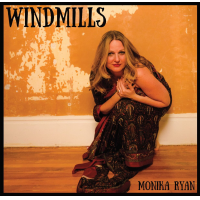 Jazz vocalist Monika Ryan has recorded a series of albums as leader since 2000 with the sensuous and audacious Windmills, a tribute to the lyrics of composers Alan and Marilyn Bergman, one of her latest projects. Voicing a repertoire of beautiful love songs and ballads, Ryan caresses the lyrics of each song with a measure of emotion and taste making for a vocal jazz album that's a pleasure to hear often.

Supporting her crisp vocal instrument are a septet of musicians anchored by a rhythm section of keyboards, bass, guitar and drums accentuated by lead players on the sax, trumpet and trombone, altogether establishing a musical background perfect for highlighting her talents as a songstress of note.

Though there are moments of swing on this session, make no doubt about the texture of the music, this is a genuine album of light jazz that appeals to the lighter side of one's musical DNA. Opening up with a creative arrangement of the title-track and time-honored standard "The Windmills of Your Mind," Ryan voices a haunting slow introduction to the song that eventually picks up to become a medium-tempo burner with Keith Loftis on the soprano saxophone, Nick Rolfe on the keyboards and guitarist David O'Rourke as featured soloists.

One of the swinging moments can be found on the lively rendition of "Cinnamon and Clove" as Ryan and the band light up the lyrics on a gyrating piece of music. The soft and mellow sound returns on the familiar classic "The Summer Knows," followed by a perkier "I Have the Feeling I've Been Here Before" and another warm version of "Moonlight." The singer and keyboardist Rolfe deliver and intimate take in a beautiful duet on the gorgeous love ballad "What Are You Doing the Rest of Your Life," while the Alan Bergman song made so popular by Sergio Mendes in 1968 and sung by Lani Hall, "So Many Stars," gets a new treatment featuring trumpeter Brad Goode and Ryan doing a terrific impression of Hall.

The Bergman/ Michel Legrand collaboration on "His Eyes, Her Eyes" works quite well here as Ryan and Rolfe on the piano provide one of the best renditions of the original around as the music comes to a close on the seductive slow-moving finale "Love Like Ours." As tribute albums go, Monika Ryan's Windmills is a homage project that the Bergman's should be proud of. Classical love songs voiced by a superior singer and backed by a top-notch cast of players, makes this vocal jazz album, a must for those who appreciate the genre.

The Windmills of Your Mind; Cinnamon and Clove; The Summer Knows; I Have the Feeling I've Been Here Before; Moonlight; What Are You Doing the Rest of Your Life?; So Many Stars; Where Do You Start?; His Eyes, Her Eyes; Love Like Ours.