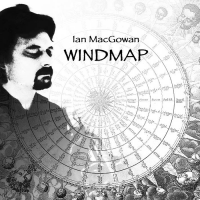 Recorded at home, in London, in December 2013, and available as a limited edition CD or download, Windmap consists of nineteen short tracks (ranging in length from thirty-four seconds to three minutes and six seconds, a total playing time of some forty minutes) of solo trumpet or flugel, played by Irish trumpeter Ian MacGowan, Some of you may be more familiar with him as Ian Smith, a founder and long-time member of the London Improvisers Orchestra.

Ingeniously, all the tracks are named after winds, from "Abroholos" (a squall that typically occurs from May to August off the coast of eastern Brazil) to "Zonda" (on the eastern slope of the Andes in Argentina). Time has not yet revealed whether the natures of the winds in question somehow match the music on their corresponding tracks...

Albums of solo trumpet are nowhere near as common as those of solo saxophone, so Windmap is a welcome innovation as well as an opportunity to hear MacGowan showcased in isolation from the distraction of other players. Across the album, he displays the full range of the trumpeter's art and of his own talent. MacGowan employs a variety of muted effects and breathing techniques to conjure a wealth of sounds from his horns that cover as broad a spectrum of emotions. Although renowned as an improviser, his playing covers a far wider range than that might imply, so that aficionados of all eras of jazz will find plenty here to admire and be enthralled by.

He manages to make every track here enthralling, compelling listening, so he never lapses into well-worn pathways and makes each piece a fresh voyage of discovery that is guaranteed to hold the listener spellbound time after time. A major achievement.