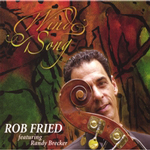 Bassist and vocalist Rob Fried has some musical heavyweights attached to his resume. He has opened for Yes, The Manhattan Transfer and B.B. King. And he's performed with artists such as Arthur Lipner, Joe Beck and Jay Azzolina, among many others.

A composer of about forty songs, Fried has performed at clubs and music festivals in the Connecticut area for about twenty years.

Fried brings his personal blend of contemporary jazz to Brazilian, Latin and R&B styles. On Wind Song, he presents a bit of them all. With a small ensemble that includes Randy Brecker on trumpet and flugelhorn, he presents a package of ten original songs that represent Afro-Cuban, Caribbean and blues styles.

The opening track, "Time Peace, is a laid-back groove that features Brecker and guitarist Phil Hamilton. Chris Parker's drumming helps set the pace, particularly his work on the hi-hat. "Cuba Duba Do, a wink toward Fred Flintsone's famous yell, puts a little more emphasis on the play of Parker and percussionist Emedin Rivera, while again featuring Brecker in the lead.

The longest track on the album, "Wind Song gives Fried and his companions room to stretch out, particularly Fried's subtle yet ever-present work on the electric bass and Parker's work on the cymbals.

Though this is his project, Fried is in the background on most of the tracks, allowing his sidemen to take the spotlight. Not so on the playful "Island Weave, which features Hamilton in the lead. On this track, and the subsequent "Samba Diane, Fried is more involved, offering an extended solo on the former and setting the pace on the latter. On "Samba Diane, Parker exercises the toms during a solo that leads into the fade. Fried is also more out front on the closing track, "Extremily, a swinging finale that is the jazziest, and possibly the best song on the album.

Whether on electric or acoustic bass, Fried easily moves from background to lead. Content at times to allow his sidemen to be the focus, he skillfully chooses his moments to shine. After all, what counts is the total package—not just one artist. Fried's songwriting and the performances by him and his fellow musicians make Wind Song a keeper.