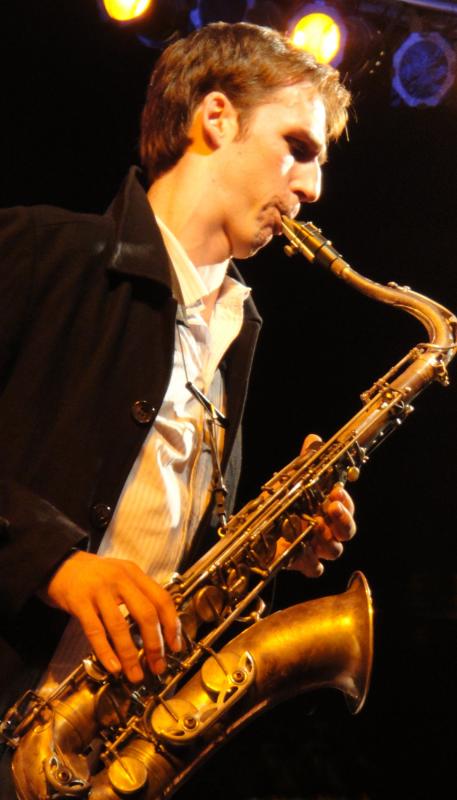 Willow Neilson Quartet
JZ Club
Shanghai February 22, 2010
Shanghai's jazz haven JZ Club was fairly full for a Monday night in anticipation of Willow Neilson's Lightbulb Lives, a performance based on original works and inspired by Neilson's varied musical background (from the rainforests of Terrania to the mountains of Yunnan). Neilson has been a stalwart of the Shanghai jazz scene from as far back as 2003 and hails from Australia. In Lightbulb Lives, Neilson intertwined Shanghai's soundscape with jazz, offering an accessibility from the streets that jazz gigs sometimes lack.

From the beginning of the first titular song, "Lightbulb Lives," two strong horns led the band in the front, Neilson on tenor sax and special guest Toby Mak on trumpet. The way they melded together attested to the fact that these two Australians have a long history of playing together (last seen backing Catherine Lambert at Shanghai's 2009 JZ Music Festival). Scherr's bass had a bounce that blended well with the groovy vibe. Scherr was fun to watch on the bass; the man can really get down. Based in Hong Kong, Scherr plays often with the cats in Shanghai and is featured in Lawrence Ku's Process and Toby Mak's Something Real. Apparently Scherr first went to Hong Kong as part of the Hong Kong Symphony, which seems a world away from the chilled out dude with a red and white electric bass onstage.

Neilson explained that "Lightbulb Lives" is about everyone in the audience, before playing a track of construction drilling that jarred the audience. He cited drilling as a rite of passage that all Shanghai-ers go through. Neilson had mentioned pre-gig that there would be a comedic side to tonight's performance. The drilling led into a Tibetan monk one chord, which added a measure of surreal. The audience stayed with Neilson as he put on a track of hammering, which served as an opener to the next song. At first the hairs on the back of my neck were in serious protest, but Ritz' percussion took away the edge of the hammer and the band flowed into the next track, which came together much cleaner than the first- as with many jazz performances, you get the feeling that they found their groove. Neilson's rhythm section was on the mark: the bass was thoughtful, the keyboard added a treble texture to the mix, and the percussion painted a colorful backdrop for the track, "Secret Society."

Neilson launched into a soulful solo in the next song, inspired by a Yunnan vocalist that was played over the speakers. His sax was clear and understated. Neilson invited special guest Theo Croker onstage for "Tubey," a song dedicated to Neilson's six year old nephew. Croker added a welcome grittiness on the trumpet as Neilson rendered a fat sound on his tenor sax through the use of an effects machine. The first set ended after a small interlude called "The Taxi Song," introduced by that lovable taxi announcement that Shanghai-ers have all heard way too many times. 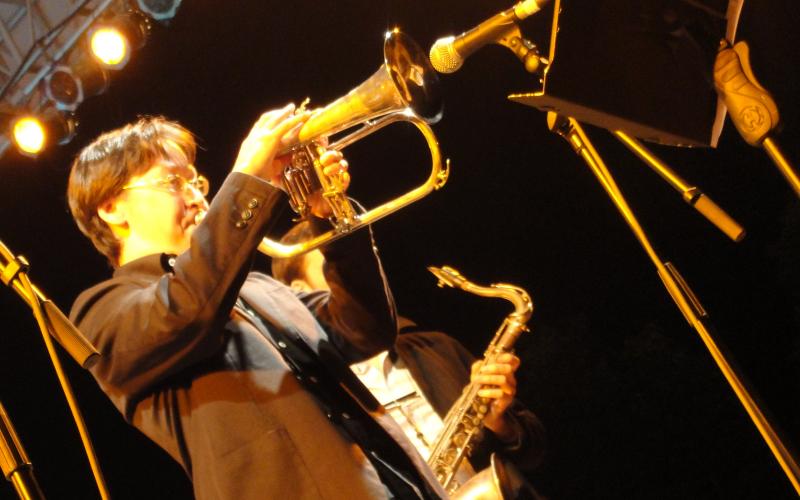 The crowd was a-bustle in anticipation of the second set. A brass duo by Neilson and Croker started the set off strong in "Microcosm." Ritz on the drums sometimes lost me in its complexity, but "Microcosm" capitalized on his rich style. Nickelsen's spirited solo wrapped things up nicely, before Neilson welcomed special guest Coco Zhao onstage to sing one of Zhao's songs, "Sunday Story," arranged by Neilson. Zhao's magnetic voice worked well with Neilson's smooth saxophone in the ballad. Nickelsen presented a beautiful keyboard solo on a setting reminiscent of Popcorn by Hot Butter, while Zhao's English spoken word performance went well with the psychedelic keyboards.

The night took a different turn with a cover of China's '80s rock legend Cui Jian. "Fake Monk" brought up images of banned performances and underground rock. The darkness in the tune was a nice foil to the overall theme of light.

The third set brought back the theme of Lightbulb Lives with pre-recorded tracks of the city streets. Neilson's interpretation of the melodies ignored everyday sent a thought-provoking message. Perhaps the next time you hear a guy on his bike marketing refrigerator-repair skills, it will trigger something other than rage. Lightbulb Lives exemplified a different way to listen to the world around us. Lemonade out of lemons; music out of noise.