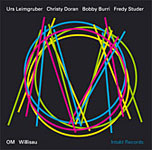 The Swiss improvised music scene is often unfairly overlooked. Whilst the efforts of other musicians from western European countries—principally perhaps Germany and Holland—have long since staked a claim to international attention, the same isn't true of Switzerland, at least until now. This isn't to suggest that the music on OM's Willisau has any kind of nationalistic aspirations, but there is something singularly compelling about it. Recorded live for Swiss Radio DRS, at the festival that gives the disc its title, this is a program that covers aspects of the free as well as dealing in mutant funk and a strain of musical Dadaism.

For all the ground covered here it's not difficult to see how the program might have been spontaneously conceived as a single entity. The discontinuities between one part and the next—exemplified most graphically by the break between "Part I" and "Part II"—somehow cohere into a unified whole, the substance of which is set by the musical personalities of the players involved. Because of this, the fractious nature of Urs Leimgruber's tenor sax on "Part IV" is not so much accompanied as it is complemented by Christy Doran's guitar shredding, within that feel of mutant funk. This is one of those touches that ensure a sense of fun; something not readily apparent in a lot of the music with which this program might cohabit, and an integral part of the proceedings.

The stealth and small sounds of "Part V" are in marked contrast with this, but that point about the ground covered comes into its own. The established mood carries over into "Part VI," but the music is marked not only by restraint, but by an obviously shared sense of dynamics. Coherence isn't sacrificed on "Part IX" either, where the devices that both Doran and bassist Bobby Burri are credited with come into play. Indeed, the augmentation of the basic reeds-guitar-bass-drums quartet that OM represents also amounts to a willful subversion of anything that lineup might imply. As a result, time is not so much suspended as dispensed with, acknowledging a denial of the potency of the fleeting moment.

There can be resolution, however. On "Part XI" the passing moments drip with the potency of group interplay—all refined, even while that funk reemerges, with the music's flow, such as it is; a mere fancy, before the delights of abstraction prove all too seductive in the closing "Part XII."