Willie Nile at the YMCA Boulton Center For the Performing Arts 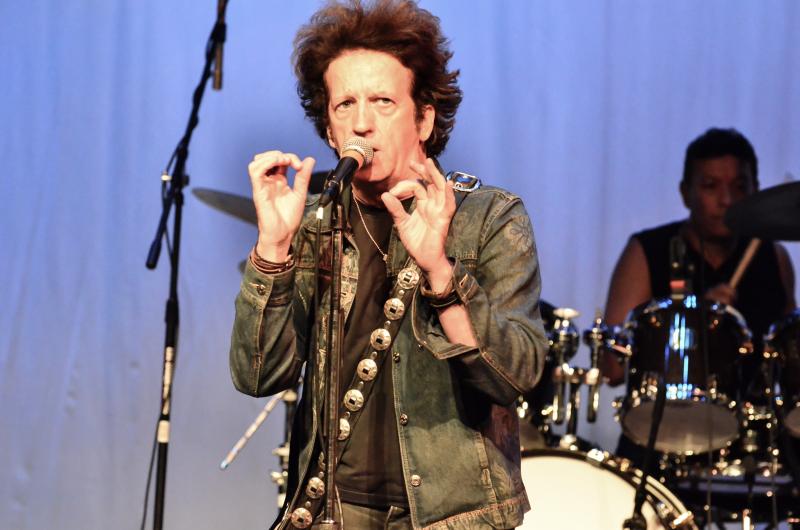 In a perfect world Willie Nile would be a superstar. The musician's career has been interrupted by various issues, bad luck, a bout with pneumonia and protracted legal problems. Nile's music, which is a mixture of Americana, folk, pop, rock, and blues. He is definitely from the old-school of singer/songwriters—writing with feeling, emotion and soul. As such one could argue that Nile is the last of the great American troubadours. Nile, whose given name is Robert Anthony Noonan, was born into a musical family in Buffalo, NY on June 7, 1948. His grandfather was a pianist who played many a vaudeville venue with, among others, Bill "Bojangles" Robinson and Eddie Cantor. His uncles played boogie-woogie in blues-pop bands. His older brothers exposed him to the music of the Everly Brothers, Elvis Presley, Buddy Holly, Fats Domino and many others. As a kind of prodigy, Nile started playing piano at eight-years-old and took classical music lessons until he was a teenager. During his college years, Nile ventured into New York City where he spent many a night at Folk City and at the Gaslight club. During the early to mid-'70s, Nile became a regular on the Greenwich Village (NYC) folk circuit. Eventually establishing residency at Kenny's Castaways on Bleecker Street, Nile began drawing large crowds and landed a recording contract with Arista Records. His eponymously titled debut album (Arista Records, 1980) generated both critical and public acclaim—so much so that Peter Townshend hand-picked Nile to open for the Who on its world tour.

Following his second album, Golden Down (Arista Records, 1981), legal issues derailed his career trajectory for a number of years. He eventually extricated himself from under those issues and signed a contract with Columbia Records in 1988. For some reason, work on the album did not commence until 1990. Places I Have Never Been was finally released by Columbia Records in 1991 and received excellent reviews. The album contained "Heaven Help The Lonely" (which should have been a mega-hit single). Following his 1992 Polaris Records EP Hard Times In America, Nile would not release a studio recording for seven years. Beautiful Wreck Of The World was released on River House Records in 1999. It would be another seven years before Reincarnate Music released Streets of New York in 2006. Though Nile's output was sporadic, both Beautiful Wreck Of The World and Streets of New York were critically praised. Since the release of Streets of New York, Nile has released six acclaimed albums (two of which were live recordings). His latest, the soulful, all piano CD If I Was A River (Red House Records, 2015) was released to very favorable reviews. His intimate, breathtakingly poetic and personal performances on If I Was A River have been compared those of Bob Dylan and Leonard Cohen.

On Saturday, September 26, 2015, Nile and his band (bassist jumpin' Johnny Pisano, lead guitarist Matt Hogan and drummer Alex Alexander), touched down in Bay Shore, Long Island (NY) for a career-spanning performance. Shortly after 8pm, Nile appeared on stage and as he made his way to the piano, he tripped. Though he didn't fall, the singer made a self-deprecating joke about being clumsy. He then sat at the piano, offered his hellos to the capacity crowd and stated, "I'm happy to be here. It's nice that there's a piano on stage." He then proceeded to play "Streets of New York." Nile accompanied himself on the piano for much of the song, but as it came toward its conclusion, his band members took their places and joined in for the coda.

Nile was in a very playful mood. He announced, "Happy Matt Hogan's Birthday!" while nodding toward the guitarist. Many members of Hogan's family were in attendance and the cheers were quite loud. Nile then pointed to Pisano and said, "Johnny Pie celebrated his birthday last week." The crowd again cheered.

The four musicians then treated the mostly middle-aged crowd to a tour de force performance of folk-drenched, Americana-tinged, blues, folk and rock. During the main set, Nile and his cohorts played nineteen songs. In addition to "Heaven Help The Lonely" and "Golden Down," Nile played "I Just Want To Hear You Breathe," "Life on Bleecker Street," "The Innocent Ones," "Rich and Broken" as well as the covers of songs by Buddy Holly ("Not Fade Away" which for the uninitiated he stated, for the record, was based on a Bo Diddley riff) and Lou Reed/the Velvet Underground's "Sweet Jane" (which he explained was recently recorded "for our new record. It'll be out maybe in February. It's a Lou Reed song. Lou was a friend of mine, so it was an honor to record this.").

Nile also told some amazing stories. He dedicated "Lost" to John Lennon, who on December 7, 1980, he explained, was recording at the Record Plant in an adjoining studio. Lennon, Nile said, was in need of guitar strings. Nile provided them. His producer knew Lennon and Nile was scheduled to meet the legend on December 9, 1980. Unfortunately, Lennon was murdered on December 8 and the meeting never occurred. The beautiful piano ballad, "The One You Used To Love," he explained, was "written in Buffalo during a symphony of snow." "I Can't Do Crazy Anymore," he said "is one of my favorites from "If I Was A River." Nile explained that he and guitarist Danny Kortchmar were sitting at an outdoor cafe on Bleecker Street one evening, when a stunning woman passed by. "Kortchmar," Nile said, "took one quick look, shook his head and said, 'I can't do crazy anymore.'" Nile paused, surveyed the audience and said, "Danny and I looked at each other and smiled. We raced back to my apartment to write the song."

Another highlight was "Love Is A Train" which he began without the band who had taken a break backstage during "Lost." Eventually Alexander, Pisano and Hogan joined-in. By the end of the song, the band was rocking out while Nile played standing at the piano (much like Jerry Lee Lewis did in his younger days). Nile who switched between guitar and piano all night shined on his six-string on "House of a Thousand Guitars," the rockin' opening track from the album of the same name (River House Records, 2009) that pays homage to Jimi Hendrix, Robert Johnson, Bob Dylan, the Rolling Stones, John Lennon, Muddy Waters and John Lee Hooker.

The unsung star of the evening's performance was Hogan, the birthday boy. The young guitarist was clearly enjoying playing in front of his family and friends. He is one of the new breed of young gun guitarist who are making names for themselves. In years to come, he will continue to be heard from. Hogan's solo on the set closer, the rollicking "One Guitar" was inspired and jaw-dropping.

Nile, who resides close by in Manhattan, also had numerous friends in the audience. This was in evidence throughout the evening as he joked, clowned and winked to the crowd while he played with abandon. The performance was joyous. Not only did he speak directly to Hogan's parents, he made mention to friends in the crowd and even called one, a gentleman named Vic, to the stage for a wild, out of control, yet endearing version of the Rolling Stones' "Satisfaction."

When the last notes of the Keith Richards-written anthem had rung-out, Nile thanked the crowd and invited its members to stop by the merchandise stand, where he and the band would "be happy to say hello." Judging from the reactions of the audience, Nile would soon be making many new friends while shaking hands and signing CDs, posters and t-shirts.

As the crowd filed out of the small venue, out onto Main Street, many were heard exclaiming how they couldn't believe the energy and passion put forth by the 67-year-old Nile. One fan was heard uttering, "Amazing, truly amazing. Why isn't this guy a mega-star?" Why indeed. Many other fans, undoubtedly were thinking the same.