William Ellis: Music On A Chink Of Light

By IAN PATTERSON
February 15, 2013
Sign in to view read count
The American Jazz Museum recognizes Ellis' talent and the role he plays in portraying and recording this greatest of musical art forms, and has supported him in giving presentations of his work in Hong Kong and Penang, where this interview took place.

In addition, Ellis was invited to serve on the committee of the Milt Hinton Award for Excellence in Jazz Photography, where he sits alongside the legendary Herman Leonard. Ellis invited Leonard to attend the opening of another exhibition of his work at the American Jazz Museum in 2008: Jazz in Black and White: Bebop and Beyond. "He wrote back saying he couldn't attend," Ellis recalls, "but sent me a lovely note which read: 'Beautiful images; glad to see someone younger has the eye. Herman.'"

Ellis has plenty of good stories about his years photographing jazz artists all over the world, and plenty of photos, too, showing the lighter side of the subjects of his photos: "I went to see Herbie Hancock in Manchester. He was introducing his band—a really hot band, of course —saying he's the leader of this band, and he's just won an Emmy for this, that and the other, and when he comes to the harmonica player, Gregoire Maret, he says: 'All he has to do is turn up with his harmonica, and that's it.' Everybody laughs and then he says: 'Mind you, I don't have to bring the piano.' He's got a ten-ton truck carrying around his concert Grand. And you could see the thought had just occurred to him. It just cracked me up." 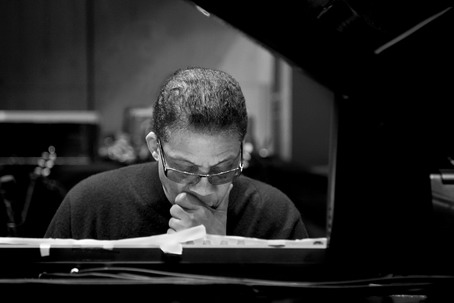 Ellis recognizes an affinity between playing jazz and doing jazz photography—two art forms which are carefully constructed yet which contain freedom, movement, spontaneity and inspiration. "Jazz to me feels in some way like a concept," explains Ellis. "It's a manifestation of feelings and attitude, but there's nothing there until it happens, and for me that's the same with a photograph. You have to have butterflies in the stomach to really go and do it. Every time I pick up a camera I have the same feeling, I imagine. I'm not a jazz musician, though I played in bands as a kid, so I have a little insight into how it feels.

"So you have your knowledge, your experience, your influences, your ability and your confidence, but nothing happens until you make it happen, whether it's hitting a note, hitting a cymbal or hitting a shutter. That's part of the great thrill—the abyss that you look down into, and there's nothing there until you make it appear. That excitement is a big part of the drive and inspiration that keeps things happening, and I think that's probably true of most forms of expression, whether it's visual arts or performing arts—that wonderful intake of breath just before you go over the edge. 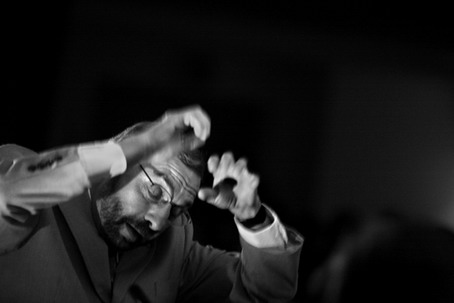 "I reach a state of mind, a point at which I know that I can make an image and convey what is happening. When I'm in that state of mind, it's a very serious state of mind. It's a very intense thing. You have to have that edge in whatever field you're in. You've got to deliver, and you're delivering to yourself, in many respects. I won't be deflected. It's an intensely personal thing. I'm creating a body of work—that's what I'm about."

Without a doubt, the drive, focus and determination to succeed that emanate from Ellis have been the major factors behind his already impressive body of work. It is a body of work that suggests that Ellis can already be considered as one of the most significant of contemporary jazz photographers.

"Some people might think that jazz photography has been done. What I do is for now and as time passes all things are viewed in a different context, but if you think about Louis Armstrong—did they break all the trumpets after Louis? No. Then there was Roy [Eldridge], and then Dizzy [Gillespie] came and then Miles, and Terence [Blanchard], and another Roy—somebody else picks it up in their time, and the band plays on."