William Ellis: Music On A Chink Of Light

By IAN PATTERSON
February 15, 2013
Sign in to view read count
"This is Michael Brecker's tenor, and that's Randy, his brother, in the background. It's a picture which is obviously very poignant now, though at the time, you don't think about what can happen. I gave him this print when I saw McCoy Tyner and Michael Brecker at the Iridium, NY, and he just looked at it and said, 'That's a nice one' and disappeared—beautiful, like a big butterfly breezing in and out."

There is a unifying thread to Ellis' work, whether it be a performance shot in a club, a concert hall or festival, or a portrait of the musicians he so admires; that common denominator is intimacy. Action shots, per se, are not what he's about. Many of the subjects of Ellis' photography are captured, revealing a softer, more vulnerable side to their often larger-than-life personas on stage.

This is something about his work that Ellis readily recognizes: "It's a very considered thing; when I look through the work that I've done, there's a definite feel to it. Maybe I'm too close to it, but they are quite peaceful pictures, really. I think there's a bit of the blues in my pictures, and that's possibly part of what people connect with as well—that kind of slight poignancy, the emotion that music gives us and the shared humanity."

This ability to capture the essence of a musician, stripped of the mantle of entertainer is seen to great effect in Ellis' photograph of jazz's greatest clown, Dizzy Gillespie: "This picture of Dizzy Gillespie [below] is a very gentle picture, a very contemplative picture. The light is beautiful and soft—he's turning to the side of the stage. That's giving us shape to the face, it's giving us definition, and it's giving us a little bit of contrast, but not too much. It's still a gentle picture which matches the expression. Sometimes all these elements come together, and that's what makes a picture. Having that appear and recognizing it and recording it—to me, that's what I'm about."

Light is never far from any discussion of photography with Ellis. When describing a photograph of pianist Mulgrew Miller he refers to the "Rembrandt quality" of the light falling on his cheek: "The light and the movement and the shapes that it makes are what make the picture.

"Maybe because I'm so conscious of the light, I'm trying to make a picture that will last, one that isn't tiring to the eye. It shows the person clearly, not just in terms of focus but in terms of who they are and where they're at, and what kind of feeling you receive from the musicians as a viewer.

"In a way, I'm trying to define what the music means to me and what that musician means to me. I don't know them personally, but I can know them a little through their music; we all feel we know the musician to some extent."

Ellis is not the type of photographer who shoots off hundreds of photos and selects the one that most appeals. He has an idea of the picture he wants, and he waits for it: The picture of pianist McCoy Tyner [next page] was one of only six shots Ellis took at this session, and the result is undeniably powerful. 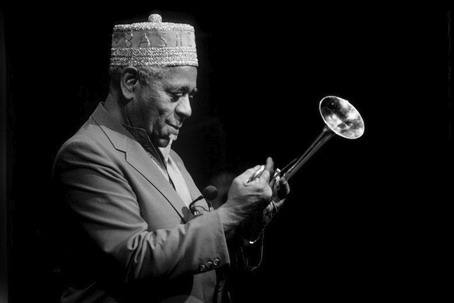 Tyner—the great pianist of John Coltrane's '60s quartet and a living jazz legend—appears in Ellis' photograph with the intensity of an Evangelical preacher, the commanding strength of a heavyweight boxer. "You can see the shadows under his nose and the shadows under his fingers—this is a very three-dimensional figure, very strong, very powerful, but kind of soft at the same time.

"As a picture, it's a kind of homage to Karsh," continues Ellis. "One of my big influences was [Yousef] Karsh, the way he used light and lit things. It's fairly studied, though it is a stolen moment. You have the light and the tungsten look. He looks elder statesman-like, respectfully observed—a respectfully observed master."

That mixture of respect and reverence towards Ellis' subjects is tangible in his photos: "From when I first started taking pictures, I felt that musicians—wherever they're performing, at whatever level—are messengers. They bring a point of view, sadness, a joy. I know they're all human like everybody else, but in a performance context they acquire another dimension, so in quite a few of my picture I can see the artist depicted heroically." 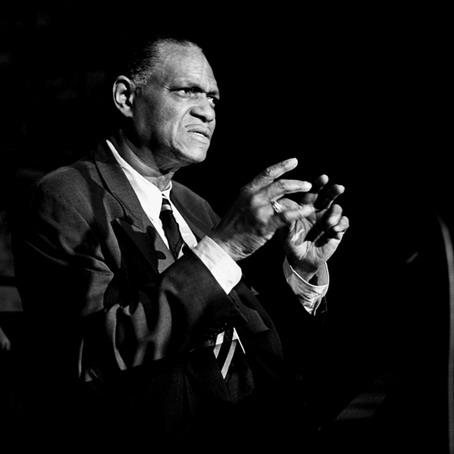 Ellis is passionate about the music and its practitioners: "Music drives the whole thing," he explains. "It inspires the image. I am oblivious to anything else. I'm very focused on getting the image that I feel should be there—it has to be discovered."

The more composed pictures in Ellis' oeuvre tend naturally to be taken offstage, like this photograph of singer Kurt Elling [below] which was shot in '09, shortly after Elling came off stage in Toronto where he had been performing with a big band. "He was doing the whole Sinatra bit," recalls Ellis. "He came off stage, and he was just kind of prowling around in this big room back stage, just coming down a little bit. He was about to go to the door to leave. I went over, introduced myself and said I'd like to make a special portrait of him. He looked at me and said, 'Okay.'

"I'd seen some down lighters to the side of the room, which was effectively the only source of light. That downward light is going to suggest drama, so that's what I went for. This was taken with a standard 50mm lens. I've got it in my mind what I want to do—I want to go for that Brando look, and there we go."

Whether shooting in a club or a festival or taking portrait pictures, however spur-of-the-moment they may be, it is very rare that Ellis is refused permission to shoot. No doubt this has a lot to do with his manner—respectful yet gently persuasive. This respect also extends to the audience whom he is standing in front of and working around, and whom sometimes he asks to move to accommodate the shot he needs.

"The way you speak to people, your manner, is so important," affirms Ellis. "You have to be confident but not a pain in the neck. When you're shooting, you have to be conscious that the audience is actually paying for this. It's a balance of always acting professionally, always being respectful to the musicians primarily—without them we've got nothing—and also respect for the audience.

"If I see that the only place I can get the shot I need is from the front row, I smile at the person, and say, Would you mind for one minute?' It's never happened that I haven't got the smile back. People know what you're doing and are on your side if you're courteous and thoughtful."

This approach to his work has seen Ellis establish an already impressive portfolio, and his talents have been recognized beyond the international jazz festival circuit. 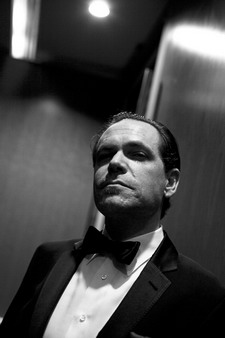 The Bridgewater Hall, Manchester commissioned Ellis to create a document of the different genres of musical performance they have there for an exhibition staged in May, 2010. Ellis photographed Tommy Emmanuel, Liza Minnelli, Buena Vista Social Club and the Halle Orchestra. It has been, as Ellis testifies, a rewarding experience. "It's been very exciting to photograph other genres of music and to see the common link that unites us all in every type of music, in terms of communication and brotherhood."

In recent times, Ellis has spent more time doing photographic portraits than in the past. It's a whole different ball game from shooting concert pictures, but again, capturing intimacy for Ellis is the key. "It's more personal; on stage it's more of an arena, and I do enjoy that side of my work, but a portrait has a different significance.

"In the portraits, I'm very relaxed and quiet, and that is reflected back. One of the things that I enjoy and place most value on is that personal contact, that eye-to eye, even if it's only for two minutes. It's very intense, but at the same time relaxed and intimate.

"When it's over, it's a shake of hands and away. An exchange has taken place, a quite profound exchange. There's an affinity, for that person to be so giving of themselves. I love that intimacy. It fascinates me what people give out, and how they give it out to you and how you respond to it. It's what photography's about for me—it's an exploration of people. You're actually photographing yourself in a way, because it's the way you see things. It's like a mirror almost." 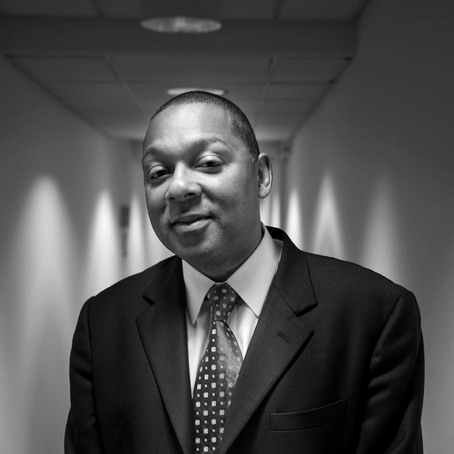 When it comes to photographic influences in addition to Karsh, Roy De Carava is one of the first names that springs to Ellis' lips. "I think he was the first Afro-American to have photographs purchased by Steichen in the Museum of Modern Art New York photography section there. He made massive steps for photography in the art world and also for Afro-Americans to be lionized in these establishment areas.

"His work was Harlem life. It's a document of a lifestyle because he was living it on the inside. When you see his work—The Sound I Saw (Phaidon, 2001) or The Sweet Flypaper of Life (Simon & Schuster, 1955) your jaw will drop—it's got so much spirit, humanity and warmth. It's very significant, profound photography.

"Then you've got people like William Gottlieb and Herman Leonard and those guys, and Lee Friedlander, who did a killer book on different genres of American music. He's better known as an art photographer now. In terms of jazz photography, probably Herman Leonard, because he's the other side of the coin to Roy DeCarava; Roy's work was real life and Herman's is more studied, more composed."

Although Ellis would shy away from any comparison with the likes of Leonard or DeCarava, his own talents have received notable recognition. Ellis was invited by the American Jazz Museum in Kansas to produce its inaugural International Exhibition in 2005, an honor which still humbles Ellis today.

"It knocks me out to feel part of creating the visual heritage of music and to be recognized in the States. It's indicative of the outlook of jazz—no nations, no borders— that a guy from England should be invited to produce the inaugural International Exhibition at the American Jazz Museum, in Charlie Parker's home town. I feel enormously privileged."