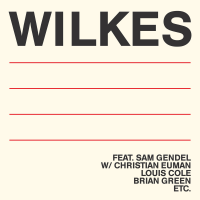 A debut album by a bassist sometimes features displays of tremendous virtuosity, an attempt to expand the boundaries of an instrument often relegated to the background. Think of Jaco Pastorius's self-titled debut album. On Wilkes, LA session musician Sam Wilkes, best known for backing electronic duo Knowner, goes in the opposite direction, and that's what makes it special.

Wilkes sets up saxophonist Sam Gendel as the lead voice instead of himself for most the album. Wilkes' bass is mostly absent until the third track "Run." Gendel mainly performs over an electronica backdrop, from the ambient drone's of the John Coltrane cover "Welcome," to the hip-hop influenced beat of "Today." This is the second album-length collaboration between the two Sams. The two albums are tied together by Wilkes production, which gives both albums a similar atmosphere. Wilkes does not aim for white knuckle psychedelia. The album is a delightful afterglow rather then a frenzy.

Wilkes deviates from this relaxed mood to create a variety of textures. "Hug" begins with sonic chaos, as electronically altered vocals bellow beneath a frenetic drum performance by Christian Euman and Gendel's sax. After about 4 minutes of auditory freak-out, the song calms down as Euman's drums fade away leaving Gendel and Wilkes alone in the electronic soundscape. The focus on songs and creating a cohesive mood instead of instrumental theatrics plays to this album's strengths, making this a solid project by a great up-and- coming artist.