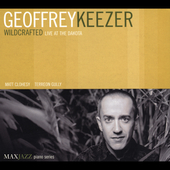 Geoffrey Keezer has established himself as one of the prime pianists of his day. He is adventurous, but adventure does not take him over the precipice. He plays thoughtfully, even as he gives vent to a rush of notes. Imagination and art work in close cleave. This live recording features Keezer originals, a couple of standards, and songs that have impressed him. That's a nice enough balance, and Keezer's trio brings it to fulfillment.

"Stompin' at the Savoy is as good an opener as any to get to the audience. Keezer explores the theme and then gives the tune his own vantage view. He plays with a lustrous stance, his notes flowing in a riptide and then, in the ebb, finding a myriad vivid consonances. He gets some fine support from the rhythm section, in particular the driving volatility of drummer Terreon Gully. Japan casts a spell through "Koikugari Bushi, which has a remarkably gentle air. Keezer infuses transparency into his playing and lays bare the soul of the song.

Keezer is a strong composer and all of his songs here reveal his innate skill. When it comes to "Ghost in the Photograph, he underscores swing, which comes in through light flecks, unhurried but nevertheless present. And when he gets to playing the melody and extending it, his tone is nectar-sweet, the underbelly swaying gently, the emotion tucked into every scintillating note.

Keezer makes every moment come alive. What more could one want?

Stompin' at the Savoy; Tea and Watercolors; Koikugari Bushi; Mirrim; Venus as a Boy; The Kindest Soul (for J.W.); Black and Tan Fantasy; Ghost in the Photograph; Breath of the Volcano.