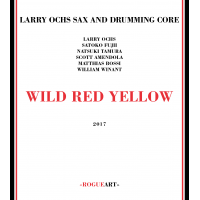 Reedman Larry Ochs' Sax And Drumming Core was famously once threatened by a punter calling the police because they weren't conforming to his narrow definition of jazz. Wild Red Yellow constitutes the second outing by the augmented version of the band responsible for that misdemeanor, following as it does from Stone Shift (Rogue Art, 2009), which similarly incorporated the Japanese pair of trumpeter Natsuki Tamura and pianist Satoko Fujii as guests. Happily they haven't been cowed by the prospect of litigation and remain as prone to a squad car visitation as ever on an adventurous studio program from 2011.

Although the three lengthy cuts feel the product of collective bargaining in their non-repeating nature and unpredictable trajectories, there are some structural elements which, together with sudden shifts in density and instrumental combinations, betray Ochs compositional input. Recurring drum phrases in "Omenicity (For Julie Taymor)" help tether otherwise fast changing kaleidoscopic exchanges, which confirm that although there are plenty of opportunities to hear all the players, this music isn't about extended solos. Rather brief vignettes or splashes of color are the order of the day. Fujii revels in one such moment of sweeping piano thunder and lurching clusters, before reaching a percussive climax in the piano interior with Ochs' tenor and Tamura's trumpet spiraling above.

At the center of "A Sorcerer's Fate" lies a percussive maelstrom generated by Fujii's piano and assorted drummers, over which Ochs and Tamura pitch an anthemic unison, before a passage of intense horn interplay, making it among the most fiery episodes on the disc. Ochs notably resists the temptation to meet fire with fire, maintaining cool muscular lines in the middle and low registers in the face of provocation. Tamura meanwhile indulges in all manner of expressive timbral effects, encompassing raspberries, splutters, slobbers and sighs, pricking any hint of pomposity with a playful intent.

The title track, dedicated to film director David Cronenberg, is as episodic as the opener, but lower key in its mysterious murmuring interchange, until opening out for a series of duets which eventually expand in scope. Particularly fine is the call and response between Ochs' skronky tenor and one of the drummers, in a reminder of the outfit's origins. Ochs' almost reveille-like conclusion strikes an elegiac note bringing the curtain down on a unique soundworld in which the putative guests are as fully integral as the core in realizing the saxophonist's vision.

As an aside if it matters to you who does what, it's worth noting that while the three drummers, Scott Amendola, Matthias Bossi and William Winant, are spread out across the soundstage, their relative positions are not identified on the sleeve.