By KARL ACKERMANN
August 14, 2015
Sign in to view read count 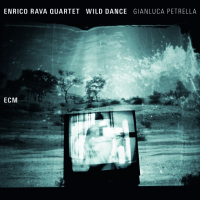 The senior statesman, and easily the most recognizable name in Italian jazz, trumpeter Enrico Rava returns with a revised quintet line up on Wild Dance. Rava, who early in his career worked with saxophonist Steve Lacy, pianist Mal Waldron and trombonist Roswell Rudd, later went on to team with drummer Tony Oxley and sit in with the Global Unity Orchestra. His free jazz pedigree belies the fact that Rava has more often leaned toward the lyrical while incorporating his own liberal style of invention.

Two of the three most recent Rava releases, Rava on the Dance Floor (ECM, 2012) and The Monash Sessions (Jazzhead 2013) have featured the trumpeter in the company of rather large ensembles. Not since the alternating quintet/sextet of Tribe (ECM, 2011), has Rava recorded in the relatively smaller combo setting. Trombonist Gianluca Petrella and bassist Gabriele Evangelista return from the aforementioned outing, joined by new arrivals, Francesco Diodati on guitar and drummer Enrico Morello.

Rava has an understandable fondness for the trumpet-trombone interaction; the trombone being his first instrument before teaching himself the trumpet. He and Petrella engage in harmonies or counter each other in discourse and generally make for an unsurpassed brass frontline in addition to their many solo opportunities. Morello shows a deft touch in directing the music through Rava's many complex shifts. It is Diodati however, that is a major find here. The guitarist plays in a crystal clear, straight-forward style when he is up front and churns out airy harmonies when directly supporting Rava.

"Diva," the first of fourteen original compositions, and the subsequent "Space Girl" are airy but with dark undertones and both showcase the dynamics between Diodati and Rava. The latter features some fine playing from Evangelista as well. The bassist also sets the stage for the looser "Don't," opening the program to the wild part of Wild Dance. That sense of abandon is more fully realized with "Infant" where structures are fleeting and improvisation is more antagonistic. Rava wisely disseminates styles throughout the collection, allowing breathing time as on the gentle "Sola," then slowly rebuilding the fire on "Not Funny." The title track lives up to its name as it veers from lyrical to near experimental.

Rava peppers the album with an array of sounds from the mysterious—but lively—"F. Express" to fragmented inventiveness of "Cornette" and the collectively written "Improvisation." A small number of tracks are refreshed versions of older Rava compositions and they are comfortably at home with the newer material. Rather than settling down, the trumpeter continues to explore new ways of expressing himself in a variety of settings. While Rava maintains his method of using the middle and upper registers in a specific and functional manner, there is little about his work that does not completely engage. Wild Dance is the most satisfying of his albums in this decade.