Katie Guthorn: Why Not Smile? 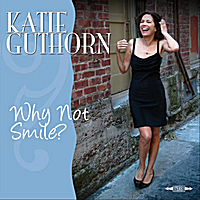 San Francisco-based actress, educator and singer Katie Guthorn is primarily known for her work in pop, R&B, Motown and even country music, having performed with groups such as the Soul Delights and the Randy Craig Trip. Though jazz has been part of her repertoire in the past, it has never truly been her main dish or passion. Jazz, however, is exactly what Why Not Smile? is all about, and the singer that does a superlative job voicing the music of Rodgers and Hart, Duke Ellington and Billy Strayhorn, among others.

Making this jazz project all the more intimate, Guthorn fronts an intriguing quartet. The recording is a family affair: husband Terry Haggerty plays guitar, his brother, producer Tim Haggerty, is also on bass and keyboards, and Tim's son Aaron does the honors on drums. Tenor saxophonist Armen Boyd, the only non-relative in the group, rounds out the personnel.

Old, oft-recorded standards are the main course on this album of light jazz. Guthorn's tender vocal approach seems well-suited for the sensitive ballads that make up the majority of the selections. Straight-ahead swing is still part of the session though, as evidenced by the upbeat, lively, and unique Latin-styled rendition of the Tony Hatch classic, "Call Me," first composed for Petula Clark and popularized by Chris Montez and Frank Sinatra. The great Latin swing arrangement may have been inspired by Tim and Terry's Cuban heritage—father Frank was Irish, mom Gloria was a Cuban dancer.

The vocalist delivers a truly beautiful and lush performance on Strayhorn's immortal "Lush Life," which contains cushy keyboards and synthesizer backgrounds, and she simmers on the Ellington's "Prelude To A Kiss." Accompanied well by stellar instrumentals, Guthorn hums through a terrific jazzy version of the Joni Mitchell song, "Black Crow," and takes off on "Where Or When." The singer performs tasteful balladic renditions of standards such as "Do You Know What It Means To Miss New Orleans," "You Don't Know Me," and "I Got It Bad (and That Ain't Good)." Other notable pieces include a brisk "Rainbow Connection," the other hot Latin swing song, "Overjoyed," and the soft-colored title track—essentially a medley with Charlie Chaplin's iconic "Smile" as the foundation.

While this is clearly a vocal album, the producer, guitarist, and saxophonist do play important and pronounced roles. Offering a selection of gentle ballads, swinging rhythms and a slice of the Latin flair, Katie Guthron and crew deliver an inviting production of jazz music. There are plenty of reasons Why Not Smile? can serve as Guthorn's launching pad into the jazz genre: she interprets familiar standards like a seasoned veteran, she possesses a well-honed vocal approach, and she is surrounded by a supportive musical family. These are all the ingredients Guthorn needs to warrant the label of "jazz singer."

Call Me; The Luckiest; Prelude to a Kiss; Black Crow; Lush Life; Where or When; Do You Know What It Means to Miss New Orleans; Rainbow Connection; You Don't Know Me; I Got It Bad (and That Ain't Good); Overjoyed; Why Not Smile?/Smile.