By SANDY INGHAM
February 21, 2006
Sign in to view read count 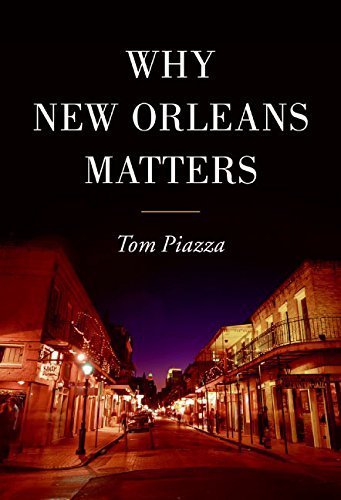 It's not strictly about jazz. It's all about the city that gave birth to the music. And just as happens in that magical, mysterious place, Tom Piazza's lyrical love song to, and lament for, his adopted home town has the spirit of its music bursting forth from every page.

The sounds, the sights, smells and tastes of New Orleans are unerringly imparted in this post-Katrina remembrance of things past and fervent plea for rebuilding the city much as it was, but better.

Piazza moved to New Orleans in 1994 and has explored it extensively, getting to know its out-of-the-way restaurants and clubs, its diverse neighborhoods, most of all its people—the people who over the generations created the culture, and who live by the laissez-les-bon-temps attitude. The people, he argues convincingly, mustn't be left out as the city regains life.

You can practically taste the muffuletta from Central Grocery, the incomparable shrimp and oyster dishes at the late lamented Uglesich's, as you read Piazza's evocative descriptions. Or feel the warm breeze on a Mardi Gras morning full of promise of new, yet timeless, adventures. See the ornate handmade costumes of feathers and beads, the outlandish dancing of the second line that typifies the celebratory attitude that prevailed here.

And you can practically hear the music, the brass band blaring out of the wide open doors at Tipitina's Uptown, or Ellis Marsalis' piano bewitching the hushed crowd at Snug Harbor.

There's a chapter on Jazz Fest, the annual springtime extravaganza that first drew the author - and this reviewer—Down Yonder. Devotees will nod in recognition of Piazza's yeah-you-right rendering of a typical day at the Fest, where all the city's essential elements—great music, unique cuisine, parades, natives and tourists—come together. My eyes were moist as I relived days of pure pleasure, days that may not ever be the same.

Mardi Gras is a party I've yet to try. Piazza makes it sound so necessary.

Piazza knows his jazz. He's co-author, with Wynton Marsalis, of the recent Understanding Jazz. He writes knowledgeably about the music's origins, recordings by King Oliver, Louis Armstrong, Jelly Roll Morton, Sidney Bechet and so many others. But he's no purist, exulting too in the phenomenal output from Professor Longhair, James Booker, Dr. John, Fats Domino, Snooks Eaglin, et al.

The book doesn't gloss over the city's problems. Piazza discusses grinding poverty, crime, drugs, corruption, racism, all with a clear eye and an understanding that so much of what is great here was created by the down-and-out. The people of New Orleans "have given love and beauty to the world, a precious spiritual resilience in the form of music, cuisine and spirit that is recognized around the world," he writes.

Part II starts with Piazza's return to the drowned city and the utter devastation he found. It's painful to read. There's plenty of blame to go around, as we all know, and the author doesn't hammer at these usual suspects so much as he skewers them with sardonic humor—especially those who thoughtlessly dismiss the storm's most vulnerable victims as barely worth worrying about. He sees Mayor Nagin as well-meaning but ineffectual and cries out for bold new leadership.

The book ends with Piazza's prescription for rebuilding the city, not as his nightmare vision of Jazzworld, an Atlantic City of the South, a caricature of its former self. It's the people, all of them, who made New Orleans the great, welcoming, beloved town it was, and the people, all of them, must be welcomed back to a place with hurricane-proof levees, good jobs in the hospitality industry or at an expanded port, and affordable housing built to last.

"Maybe next year, or the year after," he tells his readers, "we will pass one another on Mardi Gras Day, with the sound of a parade in the distance, or a gang of Indians coming down the street, and we can stop and give thanks once again for this beautiful day, this life, this beautiful city, New Orleans."

I give thanks for this beautiful book. And pray that our leaders in Louisiana, and especially Washington, D.C., will take its message to heart.