By WALTER KOLOSKY
November 19, 2006
Sign in to view read count 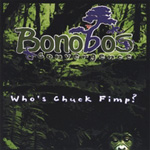 I know what you are thinking. Who are the bonobos and why are they converging? I wondered too. A little bit of research informed me that the bonobo is considered the most "human-like of the chimpanzees. They share many of our hand gestures and facial expressions, and will even walk upright when they want to. Scientists postulate that the bonobos can feel and show sympathy, kindness, altruism and many more human emotions and traits. Unlike their chimp cousins, the bonobos are extremely non-violent creatures. It turns out that the secret to the bonobos' peaceful life is abundant and indiscriminate sex. In fact, sex, lots of sex, is the main activity when bonobos "converge.

Bonobos Convergence, a band named after the exhausted and satisfied bonobos, is a power trio featuring keyboardist Pete Orenstein, percussionist Frank Registrato and guitarist Vaylor Trucks. They play music that is challenging, yet full of monkey business. Their sound is also free of the pretension you might expect from such highly skilled musicians these days.

Who's Chuck Fimp? is one of those rare CDs that delivers both on monster chops and popular appeal. As a general rule, I don't often get the opportunity to listen to music that I think should be registering on the pop charts. But this is one of the happy exceptions. The album is full of jazz-fusion, blues, jam band energy, engaging lyrics and absorbing hooks. Some tunes on this album should be receiving widespread radio airplay.

If anything, since we don't hear it all that often in modern music, the trio's dominant sound is the organ. Because of this, at times BC is very much a modern jam band version of early Grand Funk. Orenstein's singing even sounds like a "cooler version of Mark Farner. If that wasn't weird enough, Registrato's vocals sound like Yes' Jon Anderson, without the reverb! In fact, you would have been hard-pressed to convince me that he is not Jon Anderson on the opening "Whimsical Fantasy.

Each has a very expressive voice. But when the two vocalists harmonize, their sound is quite distinctive. It doesn't hurt that they both write engaging lyrics as well. The third member of the band, Vaylor Trucks, does no lead vocalizing, but he kills on guitar. Whether playing a laidback acoustic or burning like an electric mother a la Tommy Bolin, Trucks is a driving force throughout.

The best tunes are not the candidates for pop stardom. "Former Future is a diabolical call to get up and dance. "Wonder is an Allmanesque fusillade that features a few tips of the hat to Deep Purple. These two particular jams are much too exhilarating for today's radio programmers.

Who's Chuck Fimp?, one of the best albums of 2006, is evidence of what can be accomplished by terrific, imaginative musicians utilizing the tools of their influences. In the end, this is a unique sound presented in a creative and fun way. I consider myself to be one "chucky limp" to have heard this album.