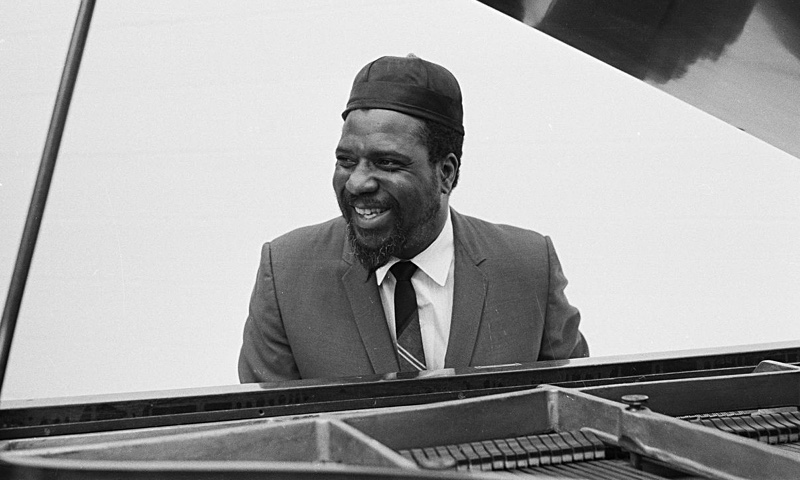 By PATRICK BURNETTE
December 13, 2017
Sign in to view read count

But what if you are a young musician trying to make your mark on jazz and mostly interested in featuring your own compositions? Can Monk teach you anything, aside from the not particularly helpful insight that it’s good to be a genius?
—Patrick Burnette

2017 is Thelonious Monk's hundredth anniversary year and as good a time as any to ask whether he has anything to teach young, ambitious, up-and-coming jazz musicians today.

Monk's recordings still nurture and entertain countless jazz fans, and the clarity and directness of his conception makes him a wonderful "introductory" artist for newbies. Gigging jazz musicians draw from the well of his compositions to fill their sets, and it's hard to imagine a future where "'Round Midnight" or "Straight No Chaser" isn't being played in a club or concert hall somewhere on earth on any given Friday night.

But what if you are a young musician trying to make your mark on jazz and mostly interested in featuring your own compositions? Can Monk teach you anything, aside from the not particularly helpful insight that it's good to be a genius?

Here are four lessons young jazz musicians might draw from Monk's career. They are offered from the perspective of someone who listens to and thinks about jazz a lot, but doesn't try to make a living from it. There are economic considerations in playing one's own compositions, but those aren't addressed here.

Lesson One: Ask yourself, am I a composer?

It's interesting to contemplate how we'd regard Monk if he'd never written a song. He's a distinctive stylist, but would he have the same place in jazz history if was purely a pianist?

In jazz, it's fairly unusual to make an equal mark as a player and composer. Duke Ellington was a fine pianist but known more as a bandleader and song writer. Thad Jones became so identified with his big-band writing that his excellence as a cornetist was often overlooked. They are double-threat exceptions to the general rule that musicians tend to be better at one job than the other. Figures like Tadd Dameron or Gil Evans are more common. Both were important composer / arrangers not remembered for their playing.

Lesson Two: If you are a composer, during your lifetime it's up to you to build your canon.

Monk, due to happenstance, badly treated mental illness, or personality type, only composed around sixty songs over his thirty-year career. Of those, maybe twenty or so have become central to the canon—which may be the most amazing batting average in jazz.

Monk had faith in those songs. He recorded them again, and again, and again, until they stuck. He recorded "'Round Midnight" half a dozen times, for example, before his Columbia contract brought him a wide audience. Would there have been less repetition if he'd composed more? Probably, but that may well have slowed down the canonization of his best songs. Even an insanely prolific composer (and borrower) like Ellington was careful to return to his best-known older compositions throughout his career (sometimes in radically re-worked arrangements).

In pop, there are a hundred "one hit wonders" for every Lennon or McCartney. In jazz, even composition-oriented artists tend to get their work boiled down to one or two great songs over time (think John Lewis and "Django" or Dave Brubeck and "Your Own Sweet Way"). Anyone who writes more than one or two jazz tunes that anybody but the composer wishes to play is some kind of anomaly. The Monks and Ellingtons are the exceptions, not the rule.

The point is that sorting will happen, so start thinking carefully about which songs you've written that might be worth returning to and recording multiple times. Start building a canon. Time helps in this process. It may be tough to decide which of the compositions on a given album are "stayers" until the album is well in the rear-view mirror. But at least ask yourself the question.

Which Monk song of the following pairs gets played more often: "Blue Monk" or "Brilliant Corners"? "Evidence" or "Jackie-ing"? "In Walked Bud" or "Work"?

The first one in each pair, right? As innovative a composer as Monk was, he didn't shy away from writing contrafacts and blues, and those remain some of his best-loved and most played compositions. They testify to his amazing melodic and rhythmic inventiveness. His tunes based on rhythm changes, for instance, each have a distinctive personality.

In practical terms, songs based on familiar progressions give musicians an entry-point to unfamiliar music. In creative terms, it's surprising how often working within a set of constraints inspires artistic achievement. Monk didn't shy away from writing thorny, challenging, nearly unplayable tunes from time to time, and there's no reason modern musicians should either. But it can't hurt to have a contrafact or two in your portfolio. Writing one might unlock some unexpected inspiration.

The all-originals album is an increasingly common occurrence in jazz, but it was an anomaly back in the day. It was the rare Monk recording that didn't include at least one cover. One might look at this as a necessary commercial concession—a record company or manager asking him to include something familiar to soothe his challenged audience. Whatever the motive, Monk's covers give the listener insight into his identity. He does not play the usual suspect Great American Songbook tunes—he plays songs that you can tell have a personal meaning for him just by opening your ears. "Just a Gigolo." "There's Danger in Your Eyes, Cherie." "I Surrender, Dear." And don't forget the hymns—"Abide with Me," and the recently reissued "By and By."

No artist creates in a vacuum. Each is nurtured in a particular cultural context. Each is introduced to the beauty of music in a different way. The first or second tune that gets stuck in your head and fascinates you might not, from a mature prospective, be a profound piece of music. That doesn't make it less part of you.

It is surprising how many contemporary jazz artists give the impression of being raised in a cultural bubble, as if their first musical experience was taking advanced composition at Berkley rather than grooving to a song on Youtube, Spotify, the radio, a parent or friend's record collection... Cover songs are a way of reaching an audience, but if chosen carefully they can also reveal something profound about an artist. Monk's Music is arguably Thelonious' single greatest album and most profound statement of who he is as an artist. It begins with a hymn.

So there you have it—four aspects of Monk's career as a player/composer that might offer lessons for today's young musicians. Maybe they won't all apply—or appeal to you. If so, it may still be worth your while to think of one.