Mike Stern: Who Let the Cats Out? 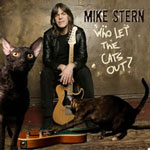 Guitarist Mike Stern has to be one of the hardest working musicians in jazz. When he's not out on the road, which is often the case, he's working on new ideas at weekly gigs at the 55 Bar in New York City. And when he's doing neither of those things, the eternal student is transcribing solos by Michael Brecker and studying theory with Charlie Banacos. While you can draw a line of logical development through Stern's discography as a leader, there's always something new on each new release.

Who Let the Cats Out? may be Stern's most fully realized record to date. It consolidates the many musical directions he's explored on past records, but there are fresh developments as well. There's the second line rhythm of "Roll With It, which he first explored on Play (Atlantic, 1999). There are examples of his longstanding approach to writing serpentine post bop themes fused with rock energy. The title track starts with a rock/funk rhythm, but once Stern and guest trumpeter Roy Hargrove play high-speed chase through Stern's knotty theme, it morphs into an acoustic workout that swings hard over a blues form.

Bassist/vocalist Richard Bona—who has toured with Stern and appeared on the guitarist's last two records—scats along with his rapid-fire bebop bass solo on "Good Question, adds a joyful world music vibe to Stern's lyrical "Language, and settles down on the tender ballad "We're With You, featuring Stern on classical guitar.

Stern's tone can be clean and chorused, as it is at the start of the greasy "Texas, which also features harmonica player Gregoire Maret in a bluesy role that will surprise listeners familiar with his work for guitarists Charlie Hunter and Pat Metheny. But Stern's solo is as down, dirty and distorted as ever, matching Miles Davis's description of his playing as "heavy metal bebop. Regardless of his tone, his energy may say rock, but his advanced language always speaks jazz.

Out of a large supporting cast, the biggest surprise is drummer Kim Thompson, best known for her mainstream work with pianist Kenny Barron. She proves a perfect fit on seven tunes here. Who would have known that she's capable of shifting seamlessly between funky backbeat and open-ended swing, as she does on "Tumble Home ?

"Blue Runway signals a change: the tune has plenty of energy, but instead of a complex theme, Stern takes a more languid approach over a lengthier series of chord changes. Proof that while it's sometimes so gradual as to feel imperceptible, Stern is always moving forward. Who Let the Cats Out? is both a superior record for existing Stern fans and a terrific starting point for newcomers.

Title: Who Let the Cats Out? | Year Released: 2006 | Record Label: Heads Up International