Antibalas Afrobeat Orchestra: Who is This America? 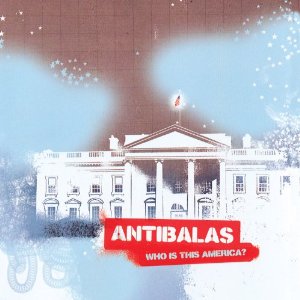 Few American bands have been more influential in the global Afrobeat movement than the Brooklyn collective Antibalas. Keeper of the African protest flame ignited by Nigerian musician/activist Fela Kuti in the 1970s, Antibalas' reach is expansive and impressive: it contributed to the Tony- nominated musical Fela!, their horn section won a Grammy for their charts on Angelique Kidjo's Djin Djin (2007, EMI), other members worked with the Sharon Jones & the Dap-Kings as the rhythm engine behind Amy Winehouse's breakout Back to Black (2006, Island), and altogether their rhythmically dynamic performances have danced through 35 different countries.

First released in 2004 but newly reissued with a bonus track, Who is This America? offers a brilliant tour through whirlwind Afrobeat. Every tune grows long and dense in organically joyous celebration of interwoven African rhythm and melody, with the joy of collective creation spreading like a warm campfire glow among Antibalas' 14 main musicians (not to mention guest players).

The new instrumental bonus track, "Money Talks" steps out with a torrid piano and horn groove that turns upside down and rocks hard across Afrobeat and New Orleans styles, a powerful show of Antibalas' instrumental prowess. "Pay Back Africa" chugs along Caribbean rhythms that set up a loose-limbed framework for the horn, keyboard, and drum soloists to blow through. The traditional Yoruba chant "Obanla'e" introduces "Elephant," a hypnotic reggae rhythm that ties together more Yoruba chanting, a horn chart that genuinely sings, dark shade of electric piano, and a masterfully segued horn solo which the trumpet player begins in Cuba and the trombone player ends in Jamaica. Like many of these tunes, this "Elephant" feels like it could stomp and rock on forever.

"Big Man" melts together from burning, multi-rhythmic interlocking parts with saxophone and keyboard solos boiling up through its thick broth, simultaneously a scathing anti-consumerism diatribe and call to abandoned dance. "Who Is This America Dem Speak of Today?" also mines a wicked, dancing Afrobeat groove, with keyboards, percussion and guitars shimmering together into a single rhythmic sheen. At the same time, it poses a profound question in a contemporary America built by immigrants and now seemingly locked in an intractable struggle over immigration. Who IS this America we speak of today—for real?

Title: Who is This America? | Year Released: 2010 | Record Label: Ropeadope