By MARTIN GLADU
January 1, 2008
Sign in to view read count 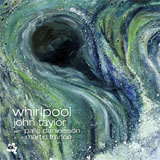 John Taylor is the pianist of weightlessness. Although overly simple, this aphoristic description of the English virtuoso's dense yet liberated musical discourse renders justice not only to its inherent quality, but to the effect it imparts to listeners. Suspended above an evanescent pulse, swift, jolted rhythms loose their grip; upwardly clouting modulating, mellifluous aural jaunts of texturally multifarious phrases and voicings. Tones, pristine and silvery, jump out like garish colors on a De Kooning canvas. Projects featuring his playing have a certain touch of sophistication and class, which he brings steadfastly. A plum listening experience, indeed, for fellow musicians and congregational jazz audiences worldwide alike.

While certain writers' affirmation of Taylor's continuation of the Bill Evans lineage does not call for any substantiated opposition, especially considering Whirlpool's overall sound, the proposition invariably reduces the man's profound knowledge of his instrument's many possibilities and history. A close listen reveals traces of different interlarding pianistic styles: from jazz masters like Richie Beirach and Bobo Stenson, but also the greats of classical keyboard music such as Schubert, Webern and the Impressionists.

In addition to these various aesthetics he has absorbed and molded to his compositional and improvisational sensibilities, his early partaking in the free jazz continuum left a clear imprint on his music. Now in his late sixties, and at the zenith of his overlooked yet meritorious career, Taylor counts amongst the top-level jazz artists to have an impact on the genre.

Consisting in an equal mix of three of his own compositions and those of trumpeter/flügelhornist friend Kenny Wheeler (as well as a Gershwi's "I Loves You Porgy" and Gustav Holst's "In The Bleak Midwinter"), Whirlpool—released on the Italian CamJazz label that has salvaged the two former ECM artists' prospects of a steady recording agenda—leans more towards straight-ahead, blowing sessions such as Blue Glass (Jazz House, 1991) in its classicism, than more open affairs like Overnight (Sketch, 2002), Angel Of The Presence (CamJazz, 2006) or Rosslyn (ECM, 2003), his first and only outing on ECM as a leader.

That said, not only for the endemic Wheeler gems but also for its stellar musicianship and colloidal interaction, Whirlpool offers a good taste of contemporary jazz's most brilliant musical minds. One can loose oneself in Swede bassist Palle Danielsson's firm and fatherly yet sensitive embrace, and drummer Martin France's entrancing trap work admirably supports this superior trio. Splendid!

Consolation; For Ada; Nicolette; The Woodcocks; I Loves You Porgy; Everybody's Song But My Own; In The Bleak Midwinter.