The Sons of Brasil: While You Were Out 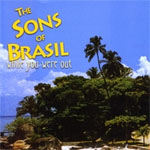 Who would imagine that a group of American musicians from Kansas City, Missouri, could have such a passion for "musica bem Brasileira" that they have stayed together for 18 years, developed a strong following and managed to release one of the finest albums of Brazilian jazz to date? The Sons of Brasil is such a group, and While You Were Out offers an impressive repertoire, featuring pieces from the sub-genres of bossa nova, samba and choro styles of Brazilian music.

Led by trumpeter, band leader, educator and clinician Stan Kessler, The Sons of Brasil is a core sextet drawn from the talent-rich musical community in the Kansas City area. The band includes Danny Embrey on guitar, Greg Whitfield on bass, Doug Auwater on drums, Gary Helm on percussion and Roger Wilder on piano. For While You Were Out, the band adds the talents of percussionist Luiz Orsano, who performs on "Salvador" and the title track.

No Brazilian-style recording would be complete without at least one composition by the great Antonio Carlos Jobim, and this album is no different, providing a sensuous reading of the immortal "Desafinado," arranged by Kessler. He also lends a tender flugelhorn voice to this excellent rendition of the classic. Auwater does the honors on the other Jobim cover, "Surfboard," where Embrey and Wilder lead the melody in front of Kessler's more supportive flugelhorn bows.

Except for Jose Roberto Bertrami's standard "Partido Alto" and Joao Bosco's "Bala Com Bala," the remaining repertoire consists of originals from Kessler and members of the band, starting with the high-energy samba beats of the opening Kessler tune "Joao," featuring the bandleader on flugelhorn. Embrey is magnificent throughout, making his guitar dance through lively Brazilian rhythms. He also contributes three charts of his own, with "Migration," "Journey," and the gentle, light ballad, "Tell Me Now." Other exceptional pieces include "I've Got Samba," Wilder's "Esso Bees" and the gritty choro-styled finale "It Feels Good."

Kessler and The Sons of Brasil prove that a Midwestern band, playing a host of exciting Brazilian-flavored music, can be authentic and successful with spicy sambas and cushy bossa nova music that are tailor-made for lovers of the genre.

Title: While You Were Out | Year Released: 2009 | Record Label: Self Produced

About The Sons of Brasil