Danielle Reich: While We Were Dancing 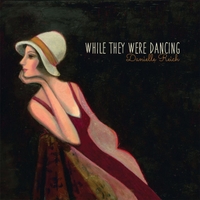 The Austin Texas satellite of the Houston Jazz Mafia, vocalist Danielle Reich, follows her debut recording This Year's Kisses (Self Produced, 2011) with a stripped-down recital right out of the heart of the Great American Songbook. Reich pares down her piano-led standard hard bop quintet to a guitar-driven (capably played by Mitch Watkins) trio. "Less is More" cannot be more true than it is here.

The present While We were Dancing displays a curiously fresh evolution listening from the first to last selection. Reich sings straight "Like Someone in Love," while Watkins comps and solos with solid confidence and direction. The performance is straight-ahead mainstream, if anyone ever needed an example of such. Things change as Reich weaves a Weimar-era "Les feuilles mortes" ("Autumn Leaves"). Watkins provides a spare accompaniment for what can only be described as an absinthe dream of a recital piece. His solo is all curves and smooth edges, delicate and soothing. Reich's French is breezy and languid, swinging lazily with her rhythm section of bassist G. Pat Harris and drummer Steve Schwelling who keep the time between the lines.

After a straight reading of "My Foolish Heart," Reich again sharpens the edge of the Songbook with an almost bawdy "Honeysuckle Rose." One could imagine am mature Bessie Smith singing like this has she lived long enough. Harris solos with aplomb and Watkins again provides a smooth thought in his solo. His solo chording swings and his note choice defines consonance. The group adds honey to its morphine on a splendidly relaxed "Tennessee Waltz." Reich and Watkins betray a huge country music admiration. This same admiration extends into a swing reading of Duke Ellington's "I Got It Bad and That Ain't Good."

Then, all of a sudden, or not, things take an experimental turn. Reich and a resonant Watkins provide a Twin Peaks take on Roland Orzabal's "Mad World." Dreamy is not the half of it. That is followed by a beautifully- and strangely-framed "I'm Glad There is You." Humid and Caribbean, the Tommy Dorsey-Paul Madeira classic is like a cool, tropical drink in the glass of Ernest Hemingway. Leonard Cohen's "If It Be Your Will" continues this otherworldly trend to the concluding "Dearly Beloved," where Reich ties a bow on a superbly paced and develop project.

Like Someone In Love; Autumn Leaves; My Foolish Heart; Honeysuckle Rose; Tennessee Waltz; I Got It Bad and That Ain’t Good; Mad World; I’m Glad There is You; If It Be Your Will; Dearly Beloved.

Title: While We Were Dancing | Year Released: 2015 | Record Label: Self Produced