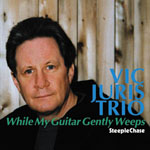 The operative word in the title of the Vic Juris Trio’s new disc, While My Guitar Gently Weeps , is "gently." In fact, the album is so gentle that it's difficult to listen to—not because the music is unpleasant in any way, but rather because Juris and company fail to grab your attention. While My Guitar Gently Weeps makes excellent background music but never demands to be listened to with concentration.

The album's concept is a fairly good one. Guitarist Juris decided to pay homage to his personal heroes, selecting songs from ten guitarists including Wes Montgomery, Jim Hall, Kenny Burrell, John Abercrombie and, as the title suggests, George Harrison. Joined by Jesse Chandler on organ and Tim Horner on drums, Juris works his way through the tunes with his dexterous fingers drawing a fat round sound from his guitar.

The album's first five tracks maintain a reflective, unhurried pace that soon allows your mind to wander. The problem is exacerbated by the similarity of tone and register that Juris and Chandler achieve throughout the recording. Chandler's organ and Juris' guitar blend almost seamlessly and the lack of differentiation contributes to the listener's difficulties. By the time the tempo picks up a notch or two, it may be too late to call the listener back.

None of this is intended to impugn the talent of the musicians involved. Certainly nothing on While My Guitar Gently Weeps calls the group's musicality into question. Indeed, the easy confidence and laid back style of the musicians may be both the album’s greatest strength and its greatest weakness.