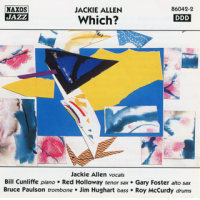 Integration. Jackie Allen’s Which? is the second vocal release from Naxos Jazz. The budget label broke the ice with Gail Wynters’ 1998 release My Shining Hour (86027-2). Allen’s breathy sensuousness is a good label foil for Wynters’ earthy purring. Both vocalists hold the impeccable Bill Cunliffe on piano, Allen also having him as band leader, arranger, and associate producer. She employs Grammy-winning Ralph Jungheim as her executive producer. The Naxos Jazz stable continues to accumulate major jazz talent with appearances by Red Holloway playing his no-nonsense tenor and Gary Foster his cerebral alto.

Differentiation. Jackie Allen’s voice is frankly alto, a reality that neatly works in her favor on the current collection of standards and originals. A snapshot of the cuts reveals a sexy, quirky “Too Hot For Words”, a smoky, smoldering “Doodlin’”, and an almost choral “Lost in the Stars”. Cole Porter’s “Which?” hosts a Red Holloway solo that showcases his 12-gauge blues sensibility and Roy McCurdy’s simply splendid march drumming. Allen’s own “Admit It” finds Foster waxing poetic is his own alto way. The torch of the disc is “I’m Just a Woman”, with lyrics and a deliver that would make NOW blanche, then blush (with a super Holloway R&B solo to boot).

Never Let Down. Jackie Allen finds herself in the company of excellent musicians and her considerable talent profits from the Naxos Jazz approach which has framed her wounded yet playful alto range with a warm ornament analog sound (Just check out the bass duet on “The Meaning Of The Blues” and Bruce Paulson’s humid trombone on “The Last Dance”). Recommended.