Michael Kocour: Wherever You Go, There You Are 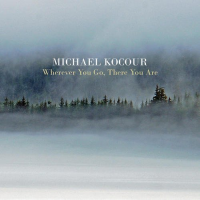 Wherever You Go, There You Are is akin to visiting pianist Michael Kocour's living room or den for an hour or so and lingering while he entertains you with his singular takes on a number of favorite songs, most of which you've probably heard before but seldom played as well as this. Kocour's lyrical style has a way of drawing one's ear into its orbit, causing time to hurry by as he strolls easily through a series of eight established touchstones and a pair of his charming original compositions.

As if his virtuosity weren't enough to hold the listener's interest, Kocour trades the standard piano keyboard on three numbers for a Fender Rhodes, burnishing Clare Fischer's "Pensativa," Eddie Harris' "Freedom Dance" and the endearing title selection whose name was taken from a favorite expression of one of Kocour's former musical colleagues, the late James Moody. It was, Kocour writes, Moody's way of reminding people that they can never run away from their troubles, as "wherever you go, there you are." The same applies, Kocour observes, to improvisation: "you can never outrun who you are on or off the bandstand, and . . . one of the secrets to making music, as in life, is getting the hell out of your own way."

It's a lesson Kocour learned, and learned well, from a number of eminent role models including Hank Jones, Tommy Flanagan, Cedar Walton and Barry Harris, each of whom mastered the demanding art of speaking clearly and eloquently from the keyboard. Like those mentors, Kocour doesn't squander notes, nor does he draw attention to his technical skill at the expense of the music, even though that skill is firm and unflagging. Instead, he lets the music speak for itself while adding his own subtle and engaging ingredients to the mix. As a result, each of these evergreens shines anew, from Dizzy Gillespie's expressive "Con Alma" to Thelonious Monk's eccentric "Evidence" (which Kocour interprets more like Jones or Flanagan than its author).

Kocour, now fifty-one and director for the past decade of Jazz Studies at Arizona State University, plays with the ease and confidence of someone who has paid his dues and knows his worth. Tantalizing ideas flow freely from his fingertips, and he is seldom at a loss for a seductive phrase or untrodden angle (listen for example to his elastic approach to the well-worn standard "Just in Time"). Kocour is also an accomplished writer, as he proves on "Winter's Spell" and "Wherever You Go," each of which is a melodious benchmark. When one sets out to record an album with only a piano as partner, he (or she) had better have plenty to say. On Wherever You Go, There You Are, there's no question that the talented Michael Kocour easily transcends that yardstick.

Con Alma; Winter's Spell; Pensativa; How About You?; Just In Time; Freedom Jazz Dance; How Deep Is The Ocean; Wherever You Go, There You Are; An Affair To Remember; Evidence.

Title: Wherever You Go, There You Are | Year Released: 2015 | Record Label: OA2 Records