Thomas Fonnesbaek: Where We Belong

By CHRIS MOSEY
September 27, 2015
Sign in to view read count 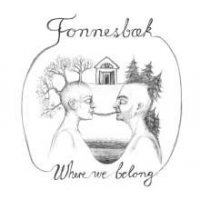 Aficionados increasingly see Danish bassist Thomas Fonnesbaek as a successor to the late, great Nils-Henning Orsted Pedersen. He is heard here as part of a trio featuring Swedish pianist Lars Jansson, the format that established his reputation.

The album consists primarily of Fonnesbaek's own compositions and others put together on the spot with the trio. There are two numbers from the Great American Songbook—Julie Styne's "Just In Time" and "Beautiful Love" a ballad by Victor Young.

Joe Pass used to perform the latter, joking that he couldn't remember if it was by Victor Herbert, Victor Young or Victor Mature. Woody Allen featured it on the soundtrack of his 1989 movie Crimes and Misdemeanors.

Fonnesbaek also plays—believe it or not—an olfactory opus. This is by Danish classical composer Carl Nielsen. "Solen Er Så Röd Mor (The Sun Is So Red, Mother)" was one of 290 songs and hymns the Great Dane wrote in the hope of evoking the "smell of Danish landscapes," though he admitted it might not work for foreigners. Here there's the consolation of Jansson's wonderfully understated piano accompaniment and the song's interesting intervals... neither of which are to be sniffed at.

Of Fonnesbaek's originals, "Norrland," is a meditation on Sweden's most northerly province, above the Arctic Circle, where in summer the sun shines both day and night (though very often obscured by bad weather) and in winter not at all. No surprise then that the song is dark and dramatic and full of contrast.

"Do It!" is funky and up-tempo, allowing everyone to stretch out a little. Jansson comes on like a latter day Bobby Timmons and drummer Paul Svanberg evokes the tightly controlled polyrhythms of Art Blakey.

While it occasionally gets a little spacey, the album, is nowhere near as weird as the cover makes out. It features an illustration of two men with trees sprouting from their heads, linked via their mouths by what looks like a rope bridge, perhaps a railway line. On a hilltop behind them a temple with open doors is decorated with an eye, presumably of the third variety.

A small anomaly: in his sleeve note Fonnesbaek refers to this as a "live recording" yet there is absolutely no evidence of it; no clapping, coughing or snippets of extraneous conversation. Of course, the audience may well have been too busy trying to smell the music to do any of this.

Norrland; Cooking; The Accounter; First Impressions; No Gluten, Please; Do It!; I Am Who I Am; Where We Belong; Beautiful Love; The Swedish Way; Solen Er Så Röd Mor; Just In Time.