By GLENN ASTARITA
December 20, 2013
Sign in to view read count 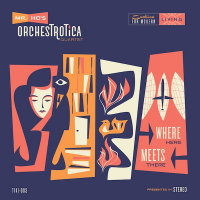 The eternally clever, Mr. Ho's Orchestrotica Quartet led by vibraphonist, percussionist Brian O' Neil categorizes itself by travelling to a future moment where American music is as exotic as its past. Hence, a persuasive declaration as the band minces Eastern modalities with cool, jazz grooves and world music cadences. They also delve into the annals of American popular music by performing three Gershwin compositions and one comp by jazz vibraphonist Cal Tjader amid several group-penned originals.

The band's pumping percussion-centric gait on "Ritual Mallet Dance," is steeped in jazz, but Skendo's enchanting bass flute lines sweeten the plot. Yet, the ensemble does not sugarcoat these works to any degree that would suggest lightweight easy listening fare. Many of these pieces bear polytonal sound-shaping mechanisms and shifting patterns via memorable hooks. On Gershwin's "Prelude for Piano I-III," the musicians convey a wistful and rather transcendental vista with supple rendering of the familiar melody lines, and one jazz-flavored garrulous burst of energy. However, Tjader's "Black Orchid" is shaped with a Middle Eastern panorama due to Tev Stevig's extended lines, performed on oud. Nonetheless, it's a very fluid and refreshing engagement, integrated with faintly designed hues, free-form detours and a few unforeseen surprises, partly aligned with nods to classical and Bulgarian choral music.