Return to Forever Featuring Chick Corea: Where Have I Known You Before / No Mystery 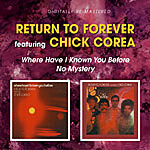 With the release of the remixed and remastered Return to Forever: The Anthology (Concord, 2008) fans of the reunited '70s fusion supergroup, touring North American and Europe since late May, including an attendance-breaking June 26 performance at the Ottawa International Jazz Festival, were given the chance to hear keyboard icon Chick Corea, guitarist Al Di Meola, bassist Stanley Clarke and drummer Lenny White more clearly than ever before. With two of the high volume, high intensity group's four discs included in their entirety—Hymn of the Seventh Galaxy (Polydor, 1973) and Romantic Warrior (Columbia, 1976)—the only shame was that, while the strongest material from the other two discs was included, the need for remastered versions of Where Have I Known You Before (Polydor, 1974) and No Mystery (Polydor, 1975) became all the more obvious.

Thanks to BGO Records, those looking for sonic upgrades need hope no longer. Though not benefiting from the remixes that make The Anthology jump out of the speakers with previously unheard detail, these remasters are a significant improvement over past CD releases. More importantly, by making them available in their entirety, it's now possible to hear material included on The Anthology in proper context. The only group track missing from Where Have I Known is the short, groove-happy jam "Earth Juice"—hardly one of RTF's more memorable tunes. Still, hearing Corea's three solo piano interludes—"Where Have I Loved You Before," "Where Have I Danced With You Before" and the title track—strengthens the more energetic tunes around them.

They're also the first time Corea had returned to acoustic piano with RTF since its Latin-esque beginnings, foreshadowing No Mystery's classic, all-acoustic title track. Where Have I Known You Before's opener, Clarke's instantly captivating "Vulcan Worlds," also signaled his shift from the dense, overdriven tone on Hymn to a cleaner tone heavy on the thumb-slapping and finger popping that turned him into a seminal influence on modern day bass heroes including Marcus Miller and Victor Wooten.

There's more group involvement on the tracks from No Mystery that were left off The Anthology, including Al Di Meola's "Flight of the Newborn" and Corea/Clarke's "Jungle Waterfall"—tunes that, alongside Clarke's deceptively catchy "Dayride" and White's more idiosyncratic "Sofistifunk," both included on The Anthology, represented a move towards shorter funk tunes. These contrast sharply with the all-acoustic title track, brief acoustic Corea/Clarke improv "Interplay" and epic masterpiece, "Celebration Suite," that originally occupied side two of No Mystery, the latter a two-part, heavily composed Corea composition that also signaled RTF's exploration of its distinctive nexus of fusion and progressive rock on Romantic Warrior a year later.

With BGO's double-disc reissue rounding out Concord's The Anthology and a tour strongly suggesting RTF is as important now as it was 35 years ago, 2008 is clearly the year of Return to Forever. All the qualities that made RTF superstars then—and, based on the tour's success, now—are available in sonically upgraded form. Now all that's needed is a live DVD...

Title: Where Have I Known You Before / No Mystery | Year Released: 2008 | Record Label: BGO Records