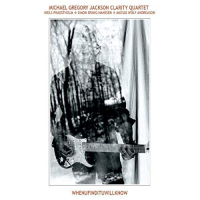 A guitarist with a prodigious recorded legacy and an omnivorous stylistic range, Michael Gregory Jackson's return to his avant-jazz roots during the past couple of decades has been a welcome, if under-recognized, development. While he cut his teeth in the '70s loft scene in the company of luminaries such as Wadada Leo Smith, Oliver Lake, Julius Hemphill, Pheeroan AkLaff, and Fred Hopkins, Jackson was never content to remain locked into a particular genre, and his subsequent trajectory included a number of recordings steeped in R&B and pop. Only in the 2000's did he once again focus in earnest on the music that first put him on the map, most notably re-joining with Smith on a couple of the trumpeter's renowned albums with Cuneiform Records, Spiritual Dimensions (2009) and Heart's Reflections (2011). But he has also revitalized his role as a leader, using his own Golden Records label to release offerings such as his 2017 trio record with bassist Keith Witty and drummer Kenwood Dennard, Spirit Signal Strata.

For his latest release, Jackson is partnered with three Danish musicians he has gotten to know rather well of late, with bassist Niels Praestholm, saxophonist Simon Spang-Hanssen and drummer Matias Wolf Andreasen having first recorded with him as the Clarity Quartet on 2015's After Before (Golden). The band's chemistry is immediately apparent, whether it's Praestholm and Wolf Andreasen's ability to forge a tasty groove or Spang-Hanssen's uncanny conversational abilities alongside Jackson. The music is at its best when the four really turn it loose, as on the infectious third cut, "Spin," where a bouncy rhythm provides an opportunity for Jackson to roll out some feisty licks while Spang-Hanssen stays right with him, the two exchanging interlocking lines with abandon as Praestholm and Wolf Andreasen raise the temperature ever-so-gradually, culminating in a fierce finish. "Souvenirs" is no less compelling, with Jackson's jagged shards driving the quartet into its most impassioned and unrestrained playing on the record.

True to Jackson's expansive tendencies, the album's nine tracks cover a lot of ground, from the gentle stroll of "Theme-X," the hard-edged freedom of "Clarity 6," or the lilting, samba-esque "Ay Yay," which includes Jackson's affecting wordless vocals. Although the album loses some cohesion as a result of its breadth, what ultimately holds it all together is Jackson's undeniable prowess. His deep melodic sensibility and razor-sharp precision are constants, so that even on listener-friendly cuts like the updated blues of "Blue Blue" or the danceable "Ay Yay," Jackson's uncompromising musical integrity shines convincingly. And the gorgeous, pensive "Meditation in E" is perfect in closing out the record: a celebration of Jackson's continuing vitality, and a hopeful sign of much more to come.