When You're Strange: A Film About The Doors

By JOHN KELMAN
September 4, 2010
Sign in to view read count

When You're Strange: A Film About The Doors

There are a usually two ways of looking at iconic 1960s rock group, The Doors. One views it as nothing more than a vehicle for front man Jim Morrison, an enigmatic and undeniably charismatic singer with little regard for convention and, to some, a profound lyricist. Another finds Morrison's self-indulgent, self-destructive behavior as nothing more than rampant narcissism; a textbook demonstration of what can happen when a massive ego gains access to big money and even more massive adulation. When You're Strange: A Film About The Doors does little to change anyone's opinion, but does set the record straight in ways that Oliver Stone's heavily revisionist biopic, The Doors (1991), never did.

It also brings greater attention to the group itself, in particular Robbie Krieger, an unorthodox guitarist who came to electric guitar from a flamenco background; playing with his fingers and developing an early passion for using a slide. There's little doubt that The Doors would never have reached the acclaim they did, had they not possessed a singer like Morrison out front; it's equally unlikely, however, that Morrison would have made his rapid ascent to pathologically unpredictable rock star, had he not been supported by three players who, curiously, eschewed conventional instrumentation as rock music's first bass-less group. Certainly, all attempts by The Doors to continue, following Morrison's death of an apparent drug overdose in 1971, at the age of 27, were met with universal disinterest.

One-third of a trifecta of rock gods who all died as the result, in some way, shape or form, of substance abuse during a 10-month period beginning in September, 1970, the passage of time makes clear that, unlike guitar innovator Jimi Hendrix and blues-belter Janis Joplin, Morrison's death was almost, in terms of posterity anyway, a good thing. Hendrix died at a time when his future may have been uncertain, but few doubted there was plenty more fresh turf for the stunningly innovative guitarist to plough. Even Joplin had plenty of room to grow as a singer. But Morrison was, at best, an adequate singer, with a rich baritone, to be sure, but nothing more; as a lyricist, he may have appeared deep at the time, but the passage of years has rendered his lyrics dated—of their time, derivative and little more. His passing at a popular peak and before his career fizzled—and it most certainly would have—has ensured a place in history books without the inevitable "where is he now?" question that, sadly, has applied to his surviving band mates.

When You're Strange is narrated by actor Johnny Depp—who was only four years old when The Doors' eponymous debut was released in 1967 and the group leapt to fame and fortune with Krieger's massive hit, "Light My Fire"—and produced by Law & Order's Dick Wolf, whose memory of the time belies the old adage, "if you remember the '60s, you weren't there." Depp's own career seems to relate to Morrison's outsider status, and he delivers the script with suitable understatement, as the 96-minute films traces the band's early emergence, through to the inevitable change in The Doors' audience—from fans of the music, to those looking simply to witness public spectacle after public spectacle, as Morrison's descent from psychedelic drug user to plodding alcoholic and heroin user resulted in numerous arrests and at least one notorious (and factually unsupported) instance of onstage flashing. 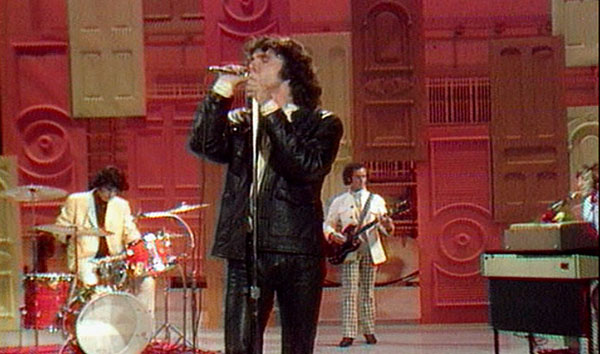 Morrison's ability to abuse was legendary; at one point, the group even hired a group of professional drinkers to hang, drink and keep an eye on Morrison; they couldn't keep up with him. His performances—many of which are documented here in small clips—were wildly unpredictable, ranging from exhilarating to embarrassing, Morrison sometimes so incapacitated that keyboardist Ray Manzarek had to take over the vocals. Clips from studio sessions, along with the live performances and travel shots of the group on the road, ultimately paint the picture of a self-indulgent, masturbatory singer who, at the end of the day, may have foreshadowed the "dumb is the new smart" stardom of the 21st century. Morrison traded heavily on good looks and a fashion sense titillating to his large fan base of young women. A bonus feature—an interview with Morrison's family and, especially his father, a retired US Navy Admiral who was busy deploying in Vietnam while his son was railing out against it—seems a little odd. During Morrison's life, his father was beyond unsupportive; the interview doesn't avoid that fact, but makes his kinder perspective, decades later, somewhat disingenuous. It would seem that when the world tells you your son is a genius, at some point you have to jump on the bandwagon and believe it.

But as much as When You're Strange does nothing to sugarcoat Morrison's various abuses, it also shows just how charismatic the singer could be when he was "on." More importantly, however, it brings attention to the talents of the rest of the group: Krieger, the songwriter and unorthodox rock guitarist; Manzarek, the sonic and organizational anchor; and John Densmore, a drummer with a predilection for jazz but an equal allegiance to rock energy and rhythm. 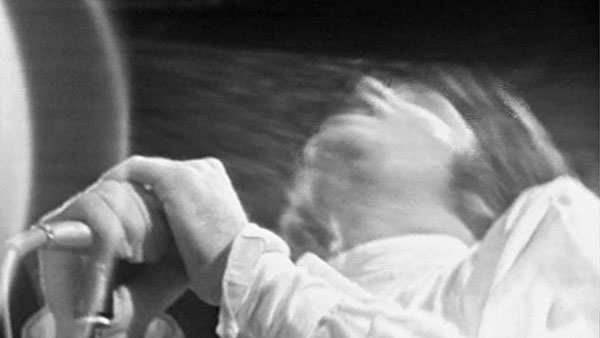 With so much iconic music—the kind of music that many have not actively sought out to hear, but through films and radio remain completely familiar—The Doors' place in rock history is already cemented. When You're Strange: A Film About The Doors provides a concise and compelling window into The Doors' equally rapid ascent and descent, with the background of the 1960s (Robert Kennedy, Vietnam, Charles Manson) creating a visual and sociological context for a group that couldn't have emerged or succeeded at any other time. Director Tom Dicillo's wrapping conceit—an actor, clearly intended to be Jim Morrison, hitch-hiking and taking over a car—feels more than a little forced, but doesn't detract from the film's honesty and factual accuracy, painting a complete picture of The Doors for all its good...and all its bad.

Photos captured from When You're Strange: A Film About The Doors, courtesy of Eagle Vision