Dianne Reeves: When You Know 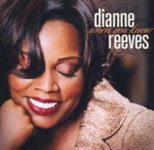 The liner notes on When You Know offer the possibility of greatness: Geoffrey Keezer and Billy Childs split time on keyboards; Russell Malone lends his wizardry to most of the date; and the rhythm section is top notch, whether it's manned by Reuben Rogers and Greg Hutchinson, or by Reginald Veal and Antonio Sanchez. Then there's legendary producer George Duke, who also contributes evocative piano to the velvet ballad "Over the Weekend." With these ingredients, it would be no surprise if When You Know turned out to be a musical revelation.

So why does this disc seem flat as a flounder?

The blame can't be put at Reeves' feet. The Detroit native's voice is as alluring as ever, and her commitment to the material seems genuine. Her personal approach to "Just My Imagination" makes up for the minor damage that is done—by necessity, admittedly—to the original rhyme ("Each day through my window/I watch him as he passes by/I say to myself/'You're such a lucky girl'"). Reeves is downright sultry on the torch song "I'm in Love Again," and it would be hard not to feel empowered by the towering title track, which gives a comforting message to anyone who is lost or alone.

There's even a glimpse of Reeves' upbringing on the rousing gospel tune, "Today Will Be A Good Day." The lyrics are credited to Reeves, but she dismisses the credit immediately with a great spoken-word introduction, saying all the lyrics come from things Reeves heard her mother say every day of her life. "Now I get to spread the good news," Reeves enthuses, "and sing it to the world!" Malone sure seems inspired, as he trades his normal Wes Montgomery sound for some Old School electric blues worthy of T-Bone Walker.

Unfortunately, pieces like "Today," the title track, and Reeves' sassy take on Jon Hendricks' "Social Call" are exceptions to the rule. Reeves' own website proudly claims "When You Know is Dianne's most commercial offering in years," and that is a fair assessment: Shooting to become the home of the next crossover mega-hit, the remaining seven tracks are blatantly sculpted for radio airplay, with nothing that might offend or, even worse, challenge potential listeners.

Classics like "Imagination," Minnie Ripperton's "Lovin' You," and the Bergman-LeGrand standard "Windmills of Your Mind" are completely faithful to the original recordings, but these new versions have no heart or spark at their centers. The same goes for Reeves' English-lyric take on Jobim's "Once I Loved"; consumers would be better off looking for The Composer of Desafinado, Plays (Polygram, 1963), because Reeves' version is devoid of the original's dreamy romanticism.

If When You Know had followed the lead of its last three tracks, this could have been the most interesting vocal release this year; instead, commerce won the day. And while Reeves deserves all the money she can dead lift, she would have been better served by a disc that wasn't dumbed down for the lowest common denominator.

Just My Imagination; Over the Weekend; Lovin