XNA: When We Changed You

By GLENN ASTARITA
February 25, 2014
Sign in to view read count 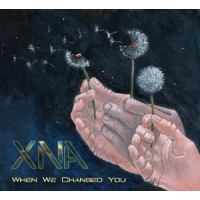 The handsome packaging is a bounded cardboard book with artwork, photos and lyrics to instill or perhaps reinforce that this newly formed neo-progressive rock band, cherishes the artistically minded era of the olden days of yore. It's not a shabbily produced set by any stretch. With a few understated quotes and inferences to vintage Genesis and an all-encompassing prog rock trajectory, the band seamlessly fuses the old with the new. The production coalesces memorably melodic comps with the artists' impressive technical faculties via grandiose storylines, hummable hooks, blustery climactic overtures and the frontline's passionately enacted solos.

Led by vocalist David Hussey of the Genesis tribute ensemble Gabble Ratchet, the program is chock full of tuneful storylines, accorded a little bite by guitarist Danny Bryle's streaming sustain licks and crunchy single note leads. But Hussey's emphatic and sincere deportment adds believability to the lyricism. However, the ensemble augments its attack with gritty soloing, symphonic textures, and a conspicuous penchant for the dynamic.

Keyboardist and Sci-Fi enthusiast Adam Malin is as a co- founder of Creation Entertainment—an organization that is responsible for the original Star Trek convention—generates a multilayered scope of attack with his various keyboards. And multi-instrumentalist Billy Sherwood (Yes) plays bass and chips in on the guitar front. Moreover, Sherwood has been involved in numerous prog-rock productions for this label, including Star Trek actor William Shatner's release, Ponder The Mystery (Cleopatra Records, 2013).

On the fifteen-minute opus "Banner of the Whyte Boar," the band fuses a memorable theme with stately choruses and a few flights of fancy, nestled within a suite-like approach amid nods to Britain's legendary '70s Canterbury scene. With guest artist Tonilyn Hornung's bittersweet flute lines and Malin's supple piano interludes, the band signals a capricious or perhaps phantasmagorical throwback to the glory days of prog. Other pieces contain stinging guitars, and the unification of Eastern modalities with Western song-forms. And "The Vale of Avalon" boasts an endearing melody that is pop friendly, but contrasted with the artists' serious-minded interplay and a few twists and turns. In sum, the musicians hit the mark and touch a nerve by bridging a sense of antiquity with a novel slant, powered by their irrefutable conviction and the alluring compositions.

At Childhood’s Beginning; When We Changed You; Banner of the Whyte Boar; The Flying Dutchman; The Vale of Avalon; Annapurna; At Childhood’s End