By EDWARD BLANCO
October 8, 2013
Sign in to view read count 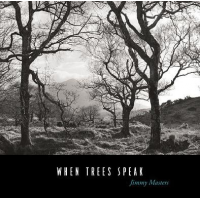 Bassist Jimmy Masters from Virginia Beach, VA has been playing the bass for the better part of thirty years and has countless recordings as a side man to his credit. Though he continues to be a fixture in the local jazz scene and a regular at the Havana Nights Dining & Jazz club in Virginia Beach, Masters celebrates his emergence on the national stage as leader presenting a debut of sharp original compositions on the very accessible When Trees Speak. Influenced by the great Ray Brown early on in his youth, Masters gravitated to jazz studying the bass under Rufus Reid and Cecil McBee and has since, shared the stage with some of the best jazz musicians in the world. It only takes one sampling of this dynamite session to find that the former student is capable of delivering an impressive lesson or two of his own and does so, on this solid and compelling first effort.

Offering a primarily straight ahead set, the program begins with the reflective "Fair with Me, Fair with You" featuring a host of local players including saxophonist JC Kuhl an educator at Virginia Commonwealth University and pianist John Toomey who directs jazz studies at Old Dominion University in Norfolk. The following creative piece "More Than Two, It's Five," finds Kuhl and Trey Pollard on electric guitar on the front line joined by vibraphonist and jazz luminary Joe Locke who appears on the first of four tracks. With the leader providing a strong and vibrant bass background, the group which on this piece, features one of the many performances from pianist Justin Kauflin as well as drummer Brian Jones, captures the haunting down tempo mood of "Nightwalk" quite well.

One thing is for sure, and that is that the original "Nothing for Certain," a lively brisk burner, is a definite highlight of the disk while the only vocal tune of the set, "The Storm," features a special treat for Masters, his wife Mary Lou Osterhous on acoustic guitar and delivering the lyrics on a light and beautiful number. Masters provides pronounced bass work as well as a warm gentle solo on the album's finale "The Water Is Wide," a piece dedicated to the wife but not before performing on one of the other outstanding tracks of the disc "Special Ones," featuring the saxophonist, guitarist and terrific vibes from Locke. Rounding out the recording is the swinging "Shaggy's Delight" where the rhythm section is particularly assertive with Toomey on piano accompanied by Kauflin's organ play.

An unselfish leader, bassist Jimmy Masters chose not to be the center of attraction with his play allowing his band to shine in the limelight with their performances. Yet, they do so playing his compositions which, in the end, carries the date and provides the main reason why When Trees Speak is such a forward-looking and entertaining debut.

Fair with Me, Fair with You; More Than Two, It's Five; Alone In The Field; Nightwalk; Nothing For Certain; A Flock of Blackbirds; The Storm; Special Ones; Shaggy's Delight; The Water Is Wide.