By JACK BOWERS
November 1, 1998
Sign in to view read count 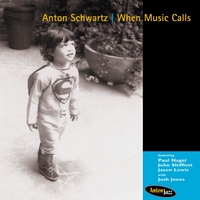 Anton Schwartz, who could have pursued a career in any number of relatively lucrative fields (he earned a B.A. in math and philosophy summa cum laude from Harvard, a masters degree from Stanford), chose music instead — more specifically, Jazz, which as many people know doesn't always pay the bills. Of course, that's not what it's about. If there's music in one's soul, and he or she has the talent to pursue it, there's really no other choice. So Anton Schwartz, Jazz saxophonist, who gigged around San Francisco for the past three years, has co-produced (with Bud Spangler) his debut album, the appropriately titled When Music Calls, on which he shows that music might not have been such an unsound preference after all. While it's nice to have those other options to fall back on, Schwartz definitely has a promising future in Jazz. Stylistically, he calls to mind another marvelous young player, Eric Alexander (and anyone who has read my reviews of Alexander's work knows how highly I regard him). Schwartz and Alexander are unvarnished smokers in the Dexter Gordon/Hank Mobley/George Coleman mold, although the more experienced Alexander's technique is at this point a touch the sharper of the two. Given time, Schwartz should recover that ground. In all other respects, he's already sound as a (1950s) dollar. Lovely, full-bodied tone, unerring sense of time, abundant storehouse of engaging albeit conventional ideas — and above all, an innate propensity to swing in any mood or tempo. Schwartz wrote eight of the ten numbers on When Music Calls (the exeptions are Rodgers and Hart's "Where or When" and "Paradoxy," his take on Sonny Rollins' "Doxy") and arranged all of them. If none seems destined for Jazz immortality, they are never less than adequate (and at least one, the charming bossa "Dénouement," ascends well above the commonplace). The rhythm section, confined mainly to a supporting role (except for several respectable solos by Nagel and one each by Lewis and Shifflett), goes about its business with clear-headed competence. As Dan Ouellette declares in his liner notes, When Music Calls represents "the first chapter of what promises to be a vital career" in Jazz. No argument here.

Too Much Pepper; Rabbit Days; Where or When; Tidepool; Through the Years; Poketown; D