Joe Fonda: When It's Time

By MICHAEL A. PARKER
December 1, 2001
Sign in to view read count 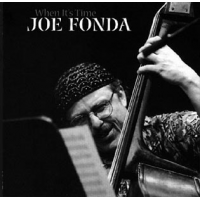 It would be a mistake to try and situate this record in a continuum of solo bass works that have been created in the past 30 years, starting with Barre Philips and Motoharu Yoshizawa's work in the late 60's.

Joe Fonda is not on some kind of mission to redefine the bass and its role in contemporary music; he's not a Dresserian guru of extended techniques or someone who has a concept of solo bass that's independent of his ensemble work, like Dominic Duval. On the contrary, Fonda's solo bass music is an expression of the same aesthetic that informs his ensemble work. Considering that his ensemble work counts as some of the best in the past decade of jazz, that makes this solo recording a very worthwhile listen. After all, any list of the five best jazz groups in the past ten years that didn't include the Fonda-Stevens group would just be a joke.

The music he plays here is essentially the same as when he takes a solo in one of the numerous ensembles he participates in; you can hear the other instruments ready to take slices of his bass whirlwind and chew them up in Braxtonian parallel layers of crystalline thematicism. His solo pieces here are filled with the same sort of energetic twists and turns that make the Fonda-Stevens group so enrapturing at their best.

In fact, it's kind of nice to hear one voice of such vital music isolated to make it easier to hear the naked logic of an individual musician. Of course, after a spin of this disc I'm anxious to hear Mark Whitecage or Paul Smoker working their magic in tandem with Fonda, but I can do so having spent some quality time getting acquainted with the rhythmic demons Fonda likes to wrestle with. By 'rhythm' I mean sweaty, pumping, rubber dances between fingers and strings, with globs of grease oozing out of every note. In fact, Fonda picks up his bow for only two of the eight pieces here; he prefers to pluck his way into epic grooves that mutate endlessly without loss of momentum. A perfect example is 'The Other Side of Things', one of my two favorite pieces on the disc; Fonda tosses out some concise and catchy themes and then runs in another direction with enough notes left in his hand to keep his rapid stream of variations connected to the bigger picture.

ADVERTISEMENT
The net result is that classic sort of delicious tension where you really want to hear a certain theme come back in its entirety but you're still pretty happy with things as they're going. My other favorite is 'My Time with J. & E.', where Fonda makes some gripping transitions between first-rate timbral and textural explorations on one hand, and his more characteristic rhythmic boxing on the other. It makes perfect sense that the first tune on the disc is based on an old R&B riff: Fonda's music is rooted in a lot of good-old fashioned musical values, and he carries them with him even when he's pushing himself to be a full-blooded participant in the avant-garde jazz culture that has been one of his main sources of musical nourishment, whether at the hands of Anthony Braxton, Leo Smith, or the multi-media performance collectives he's had an affinity for over the years.