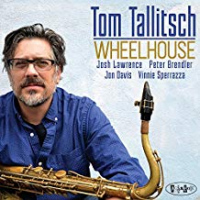 Tom Tallitsch's Wheelhouse is a recording in which something honest and genuine springs from the soil of a long established, familiar jazz style. Although pinning a hard bop label on the music is fairly accurate, ultimately it amounts to a quick, glib, descriptive fix that may distort or diminish the character of the record. The same applies to reflexively reaching for influences in the compositions, ensemble work and the soloists. In short, there's too much substance here to brood over how things fit into the scheme of classic albums and tracks from an aficionado's record collection.

Tallitsch and his cohort have a way of making a good impression without generating a lot of noise or straining with exertion. It sounds like the band's record, despite the fact that the tenor saxophonist is the leader. All five hands have piloted relatively recent sessions for Posi-Tone, yet this one doesn't give the impression of a gathering of all stars competing for the listener's attention, or an opportunistic attempt by the label to promote its artist roster. I'm not struck by the disc's originality as much as impressed by the compatibility of the participants. The top and the bottom of the quintet are mutually reinforcing. Listening to Tallitsch's tenor sax or Josh Lawrence's trumpet invariably means the simultaneous taking in of a rhythm section comprised of Jon Davis' piano, Peter Brendler's bass and the drums and cymbals of Vinnie Sperrazza. It's like each player converges and hits the same sweet spot from different angles.

In a record that thrives on moderation—beginning with Tallitsch's straightforward intro to "Wheelhouse"—a number of things add up. For instance, he possesses a knack for counting off tempos that suit the character of his nine compositions. Each in its own way, "Wheelhouse," "Schlep City," "Paulus Hook," "One For Jonny" and "Gas Station Hot Dog" are executed at a pace that feels just right. Throughout their solos, Tallitsch and Lawrence construct a steady current of ideas instead of opting for methods that are jam-packed or verbose. Tallitsch, in particular, refrains from playing anything that isn't absolutely necessary. The leader's subtly emotional turn on "Paulus Hook" and the trumpeter's puckish work during "Gas Station Hot Dog" are a couple of prime examples. There's always enough space to hear Davis comp—for instance, in the midst of Tallitsch's and Lawrence's solos on "Schlep City"—in ways that are witty, mischievous, yet never less then supportive. Brendler is a strong, stalwart presence; during Tallitsch's "Outnumbered" solo, it's as if his bass is leading the band. And drummer Sperrazza has an uncanny way of finding his own place inside of the songs and arrangements, with shifts in patterns and the dynamics of snare drum accents during the head of "Wheelhouse."

In the end, however, the high level of the individual performances isn't really what makes Wheelhouse a noteworthy recording. The particulars aren't quite as important as the sum total of each track. When musing on this record sometime in the future, the positive, coherent, uncluttered group sound will certainly elicit another listen.