By SAMMY STEIN
September 5, 2014
Sign in to view read count 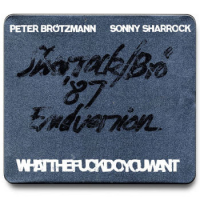 This album is a release of archived material, recorded live in Luxembourg in 1987. Peter Brötzmann has been delving into his archives a lot lately and this release is one of the gems he found. Now on the Venetian label TROST, this collaboration between Brotzmann and guitarist Sonny Sharrock is widely available. Sharrock died in 1994 and jazz lost one ot its great musicians—he had played with Miles Davis, Pharoah Sanders and others during the 1960s before fading from the scene, but returned to the spotlight as part of the free-rock-jazz-noise quartet Last Exit with bassist Bill Laswell, drummer Ronald Shannon Jackson and Brötzmann from 1986 -1990.

Brotzmann needs little introduction, as one of the stalwarts and best known players in the free jazz circuit for over 40 years. He continues to play, tour and collaborate with many musicians. This is a gem of a re-discovery about communication, listening, and musicians in tandem in every respect.

The title comes from an incident somewhere on the road, where messrs Brotzmann and Sharrock had an unfortunate meeting with a member of the management somewhere. Sharrock lost his cool, shouting the words of the title.

The CD has tracks, nominally numbered from 1-11, but to distinguish where one finishes and the next starts is difficult at times. It opens with a mind- numbing solo by Brotzmann, joined by Sharrock. The two develop a dialogue of driving beats from the guitar, countered by soaring, screeching sax. Brotzmann's trademark of heavy-handed rough timbre is used in many places, creating a sound only he really could.

In one section, Brotzmann creates an oasis of relative quiet by playing the same 3 notes over and over before the tune develops, inevitably, as the sax is taken to the limits of its range. Sharrock follows every step, at times taking over and creating intriguing instrumental interlinks. He builds the rhythmic, rolling guitar until the middle section closes with manic strumming, played at incredible speed. Sharrock's guitar is a perfect antidote to Brotzmann's style—heavy, metallic and dextrous. The album is an almost perfect dialogue between two musicians. At times it sounds like a stage full of sax and guitar players but there are always only two. They listen to each other and intuitively pick up where one leaves off.

Section five is one of the highlights—instruments weave in and out around a crazy dialogue emphasizing their intrinsic communication, totally aware of the effect on the listener. Track 6 opens with a complex solo from Sharrock, before Brotzmann echoes the riff on baritone over the top. Sharrock continues to develop the grinding rhythm whilst Brotzmann does his thing. This is experimental music at its best.

Section 7 starts with a tete a tete between musicians, with Sharrock mimicking the sax lines. Then Brotzmann takes the music in a different direction. Section 8 is a deep, sweet section with the players mingling so closely it is hard to discern sax from guitar. In track 9 Sharrock sets the rhythm before handing it to Brotzmann, who flies with it to the limits of both ends of the range. His sax squeals, chatters and chitters away, adding a touch of humor. To its end at track 11, the character of both musicians is present on this album. It is without doubt a rediscovered treasure.