Beppe Crovella: What’s Rattlin’ On The Moon? A Personal Vision Of The Music Of Mike Ratledge. 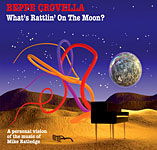 The sub-title makes all the difference here. Mike Ratledge was a key member of all the most worthwhile line-ups of Soft Machine, but alone amongst the quartet that consisted of himself, Elton Dean, Hugh Hopper and Robert Wyatt, he didn't go on to develop a solo career once he left the band. This and the passing of time, have had the effect of setting a seal on his music, but Italian composer/keyboardist/producer, Beppe Crovella has not only broken it, he's also opened Ratledge's music to an unprecedented level of scrutiny.

Crovella wisely doesn't try to reproduce Ratledge's sonic palette. Instead, he opts for teasing out the music's less obvious qualities. On "Chloe and the Pirates," this takes the form of highlighting the composer's sly melodic sense even while quasi-ambient notions come to the fore in a manner that was never a hallmark of his work.

This impression is due in part to the fact that Crovella utilizes a mellotron, perhaps the keyboard instrument furthest removed from Ratledge's sonic palette, on "Tarabos." He indulges his penchant for deconstruction on this one too, and the results are mighty effective in the way they highlight how the music can withstand not merely the personal vision but also the wholesale re-imagining.

Crovella knows his history too. "Pig" fades in like some of those vintage Soft Machine performances there's now an abundance of on record, and he goes on to flirt with the relatively faceless fusion that the band peddled in their later incarnations. This however is his prerogative. For all the surface histrionics there's still a fearsome intelligence at work, one which is permissive of only minimal self-indulgence.

The sly humor of the reworking of "Esther's Nose Job" marks the attitude of a man who's drunk deeply from the well. The almost defiant electricity of Ratledge's playing is perhaps willfully subverted here by an acoustic piano interlude that happily stays well clear of the cocktail lounge before the mellotron rears again, giving rise to impressions of the mock epic at odds with Ratledge's playing.

This however is counter-balanced by Crovella's own music, which is no mere outgrowth of Ratledge's. "Moon Geezers (to Elton & Hugh) is as gentle a homage as one could wish for, but in the looking back it implies Crovella isn't circumspect about simultaneously mapping out his own territory. The potentially sterile is thus avoided with aplomb.

Tarabos; Chloe And The Pirates; All White; The Man Who Waved At Trains; As If; Hibou, Anemone And Bear; Out-bloody-rageous; Pig; Esther's Nose Job; Slightly All The Time; Leonardo's email; Moon Vision; Many Moons, Many Junes; Lunar Impression; Circular Lines In The Air; Moon Geezers (to Elton & Hugh).