What's Going On?: Taste Live at the Isle of Wight

By DOUG COLLETTE
October 4, 2015
Sign in to view read count 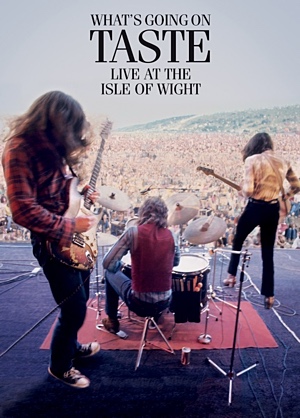 Taste
What's Going On? Taste Live at The Isle of Wight
Eagle Vision
2015

The family of guitarist Rory Gallagher has certainly done right by him with the posthumous releases they've overseen since his passing in 1995. From expanded editions of landmark albums like Irish Tour '74 (Polydor, 1974) to deluxe combinations of live and studio packages such as Notes From San Francisco (Eagle Rock, 2011), the legacy of the late lamented blues-rocker has received the attention, not to mention the passion, it deserves.

Yet no releases have done greater justice to Gallagher than audio and video recordings of his concert performances (various Live at Montreaux titles) and What's Going On? Taste Live at The Isle of Wight is no exception. Far from it as the DVD includes the seminal power trio's performance (in its entirety (on a similarly packaged Blu Ray and standalone CD as well) at the gargantuan British festival, an introductory feature, including interviews with personages including fellow Irishman Bob Geldof and Queen guitarist Brian May framing the influence of Gallagher on his peers and subsequent generations of axe-wielders, plus a bonus collection of live performances and promo videos. In sum, this varied content offers a multi-faceted and thus comprehensive vision of a band that self-destructed in the wake of what might've been their breakthrough to a larger audience.

Certainly the way Taste connected with a healthy segment of the 600,000 at the Isle of Wight and elicited demand for three encores might well have been a true harbinger of positive things to come in the short and long-term future. Yet as Garth Cartwright documents in the liner notes, festering frustration within the band and its organization led to their dissolution within hour of the August watershed, their existence prolonged only by touring commitments that kept them together through the end of the that year

Observing the ferocity of Taste's performance—even in its delicate moments there's an edge—compels theories the discord was the fuel to the intensity with which they played (though in later years Gallagher solo would compare favorably in that vein). Filming by award-winning Murray Lerner, who'd also wrought equally insightful cinema on Bob Dylan Hendrix, among other subjects, was an exquisite irony, not to mention magnificent serendipity, in that, rather than catch Taste in some measure of disarray due to travel difficulties that exacerbated the internecine tensions, Lerner captures the threesome in all their electrifying glory: his camera work and editing—not to mention the impeccable quality of the audio and video itself—positing Taste as an irrefutably great band they were, more than sufficient inspiration for the creation of this film, as Lerner himself admits.

Although the disc menu conveniently allows for individual preference, sandwiching the concert footage between the documentary and bonus features illuminates Taste's show as the logical culmination of their time together (actually the second incarnation of the trio). The documentary also explores Rory Gallagher's own Irish roots (the political aspect of which is inestimable in reckoning the man's affinity for the blues)and, perhaps most important of all, the intrinsic dynamism of Taste who, without the affectations of peers such as The Jimi Hendrix or Cream, sound equally powerful, perhaps more so for their wholly natural approach.

Comparable by acrimonious circumstance to the Beatles rooftop appearance in 1969, Taste's set at IOW illustrates the power of musical bond to transcend extenuating circumstance. Gallagher, Wilson and McCracken are as confident playing tightly within arrangements as stretching beyond the boundaries of same, their shared unity further distinguishing them from contemporaries, even more so than their aversion to the cliches of the day. The aforementioned bonus features reaffirm that impression in contrasting ways: the stark bare stage of "The Beat Club Sessions" only points up the inanity of the promo videos, the performance segments of which are the only intervals worth watching.

With documentary extant of other acts on this festival bill, including the iconic likes of the so-called West Coast Seattle Boy and The Doors, What's Going On? suggests just how much legitimate historical revision may occur in the future to elevate Rory Gallagher's stature within the pantheon of contemporary blues-rock.