What's Big and Purple and Lives in the Ocean?: The Moby Grape Story

By DOUG COLLETTE
September 9, 2018
Sign in to view read count 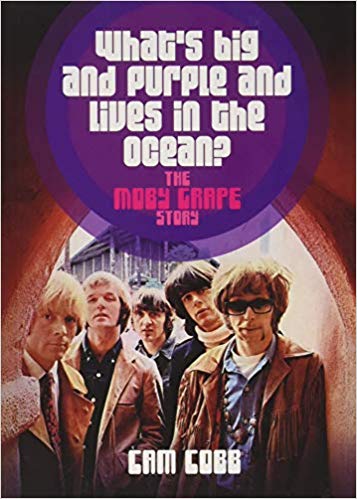 In writing The Moby Grape Story, Cam Cobb serves a higher purpose, not just for the ill-fated band itself, but rock and roll history in general. The tale must be told for this fivesome because, even if the misfortunes it encountered aren't so novel—record label snafus, bad management and run-ins with the law—there may be no other instance where a group endured such travails in such short order. The breakdown and extended hospitalization of linchpin Skip Spence, who came to the group after drumming in Jefferson Airplane, cast a darker shadow still over those trials in the year after the Grape's album debut (the man passed in 1999).

But, in a very real sense, that concentration of bad luck is proportionate to the talent within Moby Grape. Five songwriters, five singers, three distinctive guitarists and a redoubtable rhythm section is virtually unheard of—only Buffalo Springfield might compare—and it's a tribute to the initial inspiration as captured on their eponymous debut album that, even as the group crumbled under the weight of adversity, it soldiered on, even regrouping more than once in the interim since its seemingly final dissolution in 1969.

Which is renders so astute Cobb's decision to make the first real chapter of What's Big and Purple and Lives in the Ocean? a detailed report on the reunion of 1971 that produced the fifth Moby Grape studio album, 20 Granite Creek (Reprise, 1971). If only he had offered comparable coverage of those other reformations to which he alludes at least a couple times: he might better have revealed how loyal to their destiny these musicians have been over the fifty years since they coalesced as a unit. With an academic rigor befitting his faculty position at the University of Windsor Canada, Professor Cobb does recount the various combinations in which the future bandmates collaborated while playing and writing in other bands, thereby clarifying how Moby Grape bonded by the time they formally decided to call themselves a group (and adopt their name from the goofy joke referenced in the book's title).

He might well have taken a comparably scholarly approach to their later years. But the momentum Cobb generates in following the recording of the eponymous debut album dissipates into a mere litany of the band's performances around that time (he might better have simply constructed a chronology in an appendix). To be fair, it is hard to stop reading up to that point because the author sounds so excited as he discovers the details behind this woefully unsung San Francisco band; his writing carries the infectious charm of a genuine fan, so the fact he sometimes weaves his narrative too fast (and sometimes too superficially) for his and his readers' own good almost becomes a moot point.

Still, the level of depth to which Cam Cobb delves (or doesn't) into the longer view of Moby Grape becomes more relevant as he progresses through history of the group. As shared via interviews with bandmembers guitarist Jerry Miller and drummer Don Stevenson, latter-day depictions of the group's interactions are part of the conversation, but only in passing, as is the case with inevitable references to ill-advised management decisions by Mathew Katz, one of which sacrificed a prime slot on the bill at Monterey Pop, another of which resulted in at least one faux touring lineup.

To fully appreciate The Moby Grape Story, it's important to understand how long and hard the band has fought to retain its name (literally, as they naively signed it over to the aforementioned mentor) and its integrity over the course of decades. Unfortunately, the writer of this book, in his initial project devoted to music, ends up giving somewhat short shrift to those extended machinations: for instance, it would be enlightening to know the underlying circumstances of the Sundazed Records reissues of 2007, if only because those titles were bound up in legalities mere weeks after release (unlike compendia of live and studio material alluded to during the course of these two-hundred ninety some pages).

Likewise, how exactly did the reunions occur over the years, some of which included the son of the late Spence ? Cobb is careful to place each phase of his chronology in the context of its times with touchpoints of the era, but content devoted to regroupings would be preferable to recapitulations of the writer's internal dialogue, segments that seems like padding of the manuscript. It's perhaps reflective of the editing as much as the writing that the narrative might well have streamlined, excising frequent and over-long footnotes, creating appendices for pure information and even one devoted to the critical responses to each successive Moby Grape release (perhaps including this author's own?).

This involved critique of the eponymous debut album might thus be placed there. As it is, the book virtually grinds to a halt with this dissection of Moby Grape (Columbia, 1967); it's an extended treatise encompassing a chapter unto itself and one that is almost completely bereft of the joie de vivre that permeates its thirteen tracks. Such excruciating analytic overload is a common miscue of the (overly) passionate musiclover, perhaps the most egregious one here, and the author might well correct it in subsequent editions of.

Hopefully, at least one such edition will ensue from this publication, where a section of vintage photographs and colorful show poster reproductions serve as a vivid gateway to its prose. In keeping with that transition, What's Big and Purple and Lives in the Ocean? ultimately whets the appetite to know even more about a band that deserves a historical depiction as well-rounded as its own musical and instrumental skills.