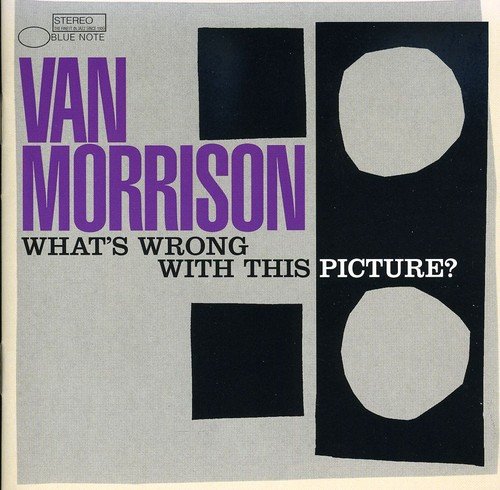 As I have grown, Van Morrison has steadily become one of my favorite singers. Maybe that's because it’s so tough to explain what he does or what kind of singer he is. You find him lumped in retail bins between Meat Loaf and Morrissey under “pop/rock”... which is an easier sell, I guess, than “the real swinging Celtic folk blues” or something closer to the truth.

Underneath its surface, beneath the structure of its songs, What’s Wrong...? swims deeply in the blues. Some are obvious blues: a visit to “St. James Infirmary” done New Orleans style, Morrison’s original jump-blues “Whinin’ Boy Moan,” and Lightnin’ Hopkins’ “Stop Drinking,” a rockabilly stomp where guitarist Mick Green whips together the sounds of country and the blues, sounding like Scotty Moore, Elvis Presley’s first great guitarist.

But so much more in the frame of this Picture moans and exults like a blues, too. “Too Many Myths” weaves Morrison’s sense of wonder of how people so often make a spiritual mess of their lives through a twelve-bar blues featuring sweet guitar work from Foggy Little. “Goldfish Bowl,” a funky old-school New Orleans blues, and “Fame,” brightened again by Foggy, wobble and crunch out bad-ass slow-rolling blues about the perils of Morrison’s profession. Morrison rears back and throws nothing but scorching vocal fastballs fueled by power that comes not from volume but from an almost mystically intense focus on the lyrics, with no note flashy or superfluous. You can say the same for Morrison’s band and the way they breathe life into this music.

“Meaning of Loneliness,” a soft almost lounge-y ballad that intertwines cool shades from guitar and organ, ponders quite the existential blues:

Well, there’s Sartre and Camus
Nietzche and Hesse
If you dig deep enough, you’re gonna end up in distress
No one escapes having to live life under duress
And no one escapes the meaning of loneliness...

This sounds like the reflection of a man who has finally grown comfortable with feeling uncomfortable in his own skin, a man positively joyous to be vamping with the saxophone to bring this baby home.

“Fame,” “Goldfish Bowl,” and “Too Many Myths” all take aim at the myth of fame and fortune, played out by Morrison in his public role as a recording and performing artist. Success and its price may be worn-out targets, but when Morrison loads up his shotgun blues on this subject, fixes it in his sights and then pulls the trigger, he simply blows it to dust. “Goldfish Bowl” sort of explains what Van does, then explores who he is and who he is not :

I’m singing jazz, blues, and funk
That’s not rock and roll
Folk with a beat
And a little bit of soul
...
Just because they call me a celebrity
That does not make it true
‘Cause I don’t believe in the myth, people
So why should you?”

It seems a fair question.