Carin Lundin: What Now My Love?

By CHRIS MOSEY
October 3, 2015
Sign in to view read count 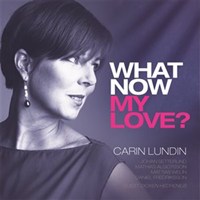 Carin Lundin is a class act, one of Sweden's best jazz singers. She hangs in there year on year, ably fending off the challenge of newer arrivals, without ever getting the full recognition she so richly deserves.

In 2005 her disk, "Songs We All Recognize" was named one of the year's best albums by the national newspaper Svenska Dagbladet. In 2007 she won the national Jazz Museum's Anita O'Day prize and in 2010 her album "Smulor och Parafraser (Crumbs and Paraphrases)" made it to fifth place in jazz magazine Orkester Journalen's Gyllene Skivan (Golden Record) reader's poll.

For this, her fourth album, a collection of standards and two of her own songs, she is accompanied by some of the Nordic nation's best young session men, led by the talented pianist Mathias Algotsson.

The title track is based on the 1961 French song, "Et Maintenant" by Gilbert Bécaud, with English lyrics penned by Carl Sigman. It was most famously performed by Elvis Presley for a live audience of a billion people in his satellite show Aloha From Hawaii, beamed to 43 countries via INTELSAT.

Lundin's version features a fine trumpet solo by Johan Setterlind, who—appropriately—goes one better on "The Second Time Around."

Dicken Hedrenius contributes excellent trombone solos on the old Louis Armstrong song "I've Got A Heart Full Of Rhythm" and "Peel Me A Grape."

The latter, along with Lundin's version of "I Didn't Know What Time It Was," is right up there with the best of them. So too the up-tempo numbers "Get Happy," on which she displays her O'Day credentials, and that fine old chestnut "Baby, Won't You Please Come Home."

Of the originals, "Do Be Mama" is a light-hearted meditation by a mother watching her children growing up and becoming independent. Lundin says, "I suddenly have so much time. Maybe I should be happy about it, but I miss being with and taking care of my kids."

"Tribute To Miss A" is a heartfelt look at the loss of a friend, at the age of 37 hit by a truck while cycling in central Stockholm—"While a lot seems faded, her precious tone lingers on."

Get Happy; What Now My Love?; Second Time Around; I’ve Got A Heart Full of Rhythm; Do Be Mama; Baby, Won’t You Please Come Home; Just Squeeze Me, But Please Don’t Tease Me; Tribute To Miss A.