By MIKE PERCIACCANTE
November 19, 2003
Sign in to view read count 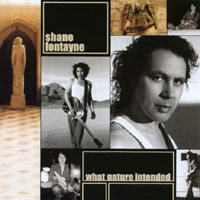 You may not know Shane Fontayne by his name alone, but you've certainly heard his music. After spending much of his career backing superstar musicians both on tour and in the studio – Bruce Springsteen, Chris Botti, U2, Paul Simon, and Shania Twain, to name but a few – Fontayne has branched out and released his first solo disc.

What Nature Intended is the guitar master's homage to his influences and his past. When one listens to this stunning debut, it is very apparent that Fontayne was influenced by the Beatles. "Weight Of The World" could easily have been a John Lennon lyric; Lennon's son Sean plays drums on "It's Only Love," which borrows its title from a Beatles song; and lastly, Paul McCartney would have been very much at home delivering the vocals on "Junk." But don't think that What Nature Intended is strictly a Beatles homage. It's much more. "Voodoo In the House" has a Robbie Robertson feel as well as a little U2 in its arrangement.

Nature is as much about who Shane is as it is about where he came from: England. Just like the musicians of the early British invasion took various parts of the American musical art form to create their own tapestry, so, too has Fontayne. The CD contains 14 excellent tracks, each a sonic treat all its own. Fontayne succeeds in paying homage to many different musical styles: English dancehall, Tin Pan Alley, rock, pop, swamp blues, and jazz.

Highlights include the romantic "There's Only Room For Me," "Little Napoleons" (which was recently featured on Sex In The City ) and "Spin It." This album is best described as sophisticated pop, and it's one of the best albums of 2003!

Visit Shane Fontayne on the web at www.shanefontayne.com .

Track Listing: Weight Of The World, Little Napoleons, Cut From The Same Cloth, Spin It, Serenade, Marlene, So High, Bubble & Squeak, It's Only Love, Weigh Down Into Gold, Burmese Inertia, There's Only Room For Me, Voodoo In The House, You'll Never Know