Denise Donatelli: What Lies Within

By EDWARD BLANCO
October 1, 2008
Sign in to view read count 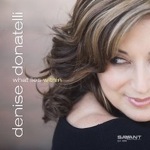 It is refreshing indeed to hear a lovely voice fronting a superb cast of musicians, and then combining to forge one exceptional recording, which is what Los Angeles-based singer Denise Donatelli has done in What Lies Within. As she voices the lyrics of Harold Arlen's "My Shining Hour"—the opening tune in a selection of eleven uncommon standards—the words "this will be my shining hour," should refer to the magical performance on an album that may well be her finest hour of studio work yet.

Not content to be seen as just another "chick singer" among the plethora of female jazz vocalists releasing albums these days, Donatelli distinguishes this recording by the assemblage of musical talent, and the guidance from pianist/producer Geoffrey Keezer who also produced the album. The singer is backed up by some of the best West Coast musicians performing in L.A. such as saxophone great Bob Sheppard, trumpeter Carl Saunders, percussionist Alex Acuna and guitarist Peter Sprague to name a few.

Following the brisk opening number, complete with light scatting and an introduction to the instrumental side of this recording with quick stylish solos from the saxophonist, guitarist and Keeze on piano, Donatelli leads the Ivan Lins song "Sails" and after a reaching lyrical chorus, once again opens the door for a slew of wonderful solo performances from the band led by Sheppard's fiery tenor voice. The music turns south providing a bit of the Brazilian flavor with a version of "I Love It When You Dance That Way" accompanied by Saunders on trumpet.

Singing softly and with measured emotion, Donatelli delivers a warm performance on the ballad "We'll Be Together Again." She's just as graceful on Keezer's original "Four Walls" and by contrast let's it all hang out on Clifford Brown's swinging "Beloved (Daahoud)," punctuated by yet more marvelous phrasing from Sheppard. Keezer introduces "This Lament" with delicate touches on the keys as Donatelli engages the finale for a beautiful duet that puts the finishing touches on a gem of an album.

Suffice to say, What Lies Within is one splendid recording of elegant light jazz vocals from Denise Donatelli; a jazz singer who belongs in the upper echelon of modern jazz vocalist. Her performance, along with the accompaniment from an ensemble of first-call players makes this a first-rate recording.

My Shining Hour; Sails (Velas Icadas); Crystal Silence; I Love It When You Dance That Way; We'll Be Together Again; Like An Old Song; Beloved (Daahoud); Four Walls; Be Cool; Make This City Ours Tonight; This Lament.