Larry Ochs / Nels Cline / Gerald Cleaver: What Is To Be Done 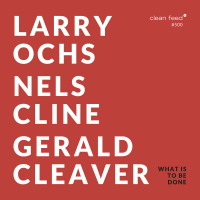 Sandwiched between two epic novels of improvisation—each a track of over twenty minutes of sound—is the respite piece "A Pause, A Rose" by the trio of saxophonist Larry Ochs, guitarist Nels Cline and drummer Gerald Cleaver. Cline, who some may know from his work with the alternative rock band Wilco, opens with a few simple notes played over the splash of cymbals before pirouetting into some hallucinogenic guitar effects. The indolent pace suggests an uncertainty, but nothing could be further from the truth. The track decelerates to allow the listener an insight into the trio's working relationship. You often read about improvisers having great ears, meaning they suppress their own individual soloing in deference to their partners. In this brief track, that is quite evident and it is a perfect guide to the two massive tomes that make up the bulk of this recording.

Cline and Ochs have worked together in the past, most famously in the ROVA Saxophone Quartet's electric performances of John Coltrane's composition "Ascension." Ochs and Cleaver released the duo performance Songs Of The Wild Cave (Rogueart, 2018). This combination of players creates an attractive sound, with most of the credit awarded to Cleaver. That is no surprise as he is one of today's most in-demand drummers and can be heard with Henry Threadgill, Roscoe Mitchell, Craig Taborn, Eric Revis, Matthew Shipp, and Ivo Perelman, to name a few. Credit goes to Cleaver here because he is the glue that holds these improvisations together.

Cleaver's pulse centers "Outcries Rousing" with a remote sort of organization. His rhythms contain the fire and fury of Ochs saxophones and the space-time effects of Cline. Even when the ferocity escalates, with monster guitar attacks that go toe-to-toe with saxophone wildfires, Cleaver holds the center, unbroken. In the words of the Dude from the Big Lebowski, he "really ties the room together." The same approach is heard on "Shimmer Intend Spark Groove Defend," which could be the soundtrack to a remake of Apocalypse Now as a science fiction film. The music travels from echoey soundscapes to guitar-rock, saxophone squark, and pulsating energy patterns. Yes, the kitchen sink is thrown in, but in the most organized way.

Title: What Is To Be Done | Year Released: 2019 | Record Label: Clean Feed Records