By AAJ STAFF
September 9, 2002
Sign in to view read count 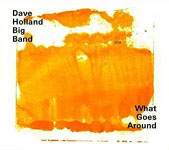 With a musical force like bassist Dave Holland at the helm, it's hard to imagine a group going wrong. But his new big band has a singular problem: too many players. Thirteen musicians, each more than capable, join forces on What Goes Around, which features seven tunes composed and arranged arranged by the man himself. Unfortunately this increase in scale just doesn't translate into much except redundancy. The core quintet (Potter, Eubanks, Nelson, Holland, and Kilson) has repeatedly proven its ability to say much more with fewer words. To date, Holland's work has focused on making statements implicitly, rather than fleshing out the meat on every bone. That's his great strength. And while there are most certainly moments on this big band disc where relatively spare instrumentation offers the same degree of clever implication, they are simply overwhelmed with arranged horns to the point where they drop off the horizon. We just don't need to hear all those details, thanks.

With that relatively scathing criticism on the plate, this disc still has much to offer if you're a fan of old-style big band nostalgia. Outside his usual modern jazz context, Holland heads directly into a more traditional sound. And these players, mostly from the progressive edges of the jazz world, have no trouble doing things the old fashioned way (at least in a relative sense). At times, intertwining improvisations offer some surprises, and the abundant solos still retain a welcome degree of unpredictability. Above all, no matter what else is happening, this music swings. With Holland at the bass and Billy Kilson on the drums, the pulse of the music is never in doubt. Holland has built some drama into the dynamics, so the group builds moving crescendos and flows from softness to brightness and back in involving ways. Several of these players (everyone, really) lend energy through solid improvisation.

Perhaps the situation here relates to perspective. Depending on what you're looking for, you'll either find it or walk away disappointed. To these ears, Holland's strengths most emphatically lie elsewhere. But perhaps other listeners will enjoy the teeming cries of these 13 voices.