By MARTIN GLADU
November 14, 2006
Sign in to view read count 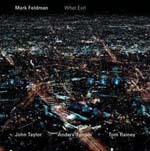 Only willing individuals like ECM Records founder and producer Manfred Eicher envision releasing recordings like this. Yet again, the Munich-based label starts where others stop: with a disc of contemporary music by a classically-trained violinist turned jazz avant-gardist. As a matter of fact, the jazz world would be incomplete without projects like What Exit.

Aided by English pianist John Taylor, bassist Anders Jormin and drummer Tom Rainey, Mark Feldman showcases his dual affection for modern classical and jazz genres on this eight-piece set. The selection of Rainey, while debatable, makes sense given the context (he is mostly known for his work with Tim Berne, Drew Gress, Mark Helias and Kenny Werner). Rainey's style, somewhat close to Paul Motian and Jim Black, finds an echo in Feldman's expressive and intense playing. Taylor and Jormin are not only perceptive and sensitive, but they are constantly creative instrumentalists throughout the recording.

A commissioned composer, Feldman's works herein nevertheless provide ample room for collective improvisation. From the processional "Cadence" to the aptly titled "Elegy," the gently swinging "Father Demo Square" and the modal blitzkrieg of the title track (with Taylor churning out McCoy Tyner-like quartal harmonies and lines), his work ranges far and wide both compositionally and instrumentally.

Notwithstanding the classical mannerisms in his bowing and phrasing, Feldman remains a nuanced technician capable of handling any musical situation (he did extensive studio work in Nashville in the '80s). While this unit will probably not be touring, fans can catch him around New York City with his spouse, Swiss pianist Sylvie Courvoisier.