Conference Call: What About...? 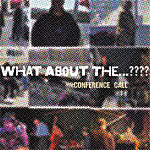 One of the finest improvising units working today, Conference Call is a complete band, capable of touching all the jazz bases, be they individual or group improvisation, or the performance of composed music. The quintet's sixth release, What About...? is a two-disc session from the band's 10th anniversary tour, and was recorded live at Alchemia in Krakow, Poland.

Conference Call's lineup has remained stable for the past three releases—since drummer George Schuller took a drum chair once held by Matt Wilson, Han Bennink, and Gerry Hemingway—and follows Poetry In Motion (Clean Feed, 2008) and past discs on Soul Note, 482 Music and Leo Records. This is the group's second live recording, allowing the band to stretch out and convey its music in an unhurried manner. The three-part "After Like" presents 32 minutes of group improvisation, across two discs. The band's instant creation covers multiple direction and moods, and allows for varied pairings and individual improvisations. The sweep of this music focuses on collective sound and the panoramas available those willing to take the journey.

Although the high energy pieces gel quite nicely, the more introspective tracks—"Translucent Tones (Gestalt In Three)" and "What About The Future?"—are the highlights of the set. The former moves with the snaking motion of Schuller's hand drumming, bells, and maracas, and the pinging of Stevens' piano, as Ullman brings forth some stately, solemn bass clarinet to set the mood. The latter piece finds Ullmann tracing his tenor saxophone against Fonda's bass, edging it into the upper register without breaking the mood. Both pieces are touchingly beautiful.

Elsewhere, Conference Call balances a left-handed bit of bebop with "Circle," with Ullman working out on soprano while Stevens rings out some chords that Thelonious Monk might have conceived. "Could This Be A Polka?" is just that, with a wry sense of old Europe, as the band crawls through the track, and stops and dissects it into solos by each player, before putting an exhausted polka to bed. Same for the crowd—undoubtedly exhausted, and quite happy.