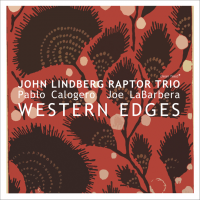 Released simultaneously with Born In An Urban Ruin (Clean Feed, 2016), Western Edges reveals yet another facet of bassist John Lindberg's interest. The Raptor Trio reunites Lindberg with saxophonist Pablo Calogero, a comrade from NYC's loft jazz era, when both were 16 years old. Calogero, who was also involved in proto hiphop groups, has been little heard of on the jazz scene, apart from featuring on Lindberg's Trilogy Of Works For Eleven Instrumentalists (Black Saint, 1985). And on this showing that's a shame. Drummer Joe LaBarbera rounds out the threesome, in a first time configuration. The set was recorded in April 2012, and it's good that the results have finally been exposed.

Lindberg has developed into one of the most talented bassists on the scene, powerful, flexible, boasting a deep sound and wonderful fat resonance, all deployed with sensitivity and taste. What strikes the listener straight away is his splendid understanding with Calogero. Three of the saxophonist's tunes appear on the album, and it is his "Ashoka" which first introduces the airy interplay between twisting bass and nuanced baritone saxophone that serves as one of the group's signature sounds. And then the delicious blend of bowed bass and baritone saxophone which starts "Ethereal Extensions" confirms that favorable impression.