Floyd McDaniel with Dave Specter & the Bluebirds: West Side Baby 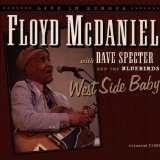 Floyd McDaniel moved to Chicago with his family when he was fifteen, in 1930. He joined a washboard band called the Rhythm Rascals in 1933 and in the following decade he was a member of a jump blues combo called the Five Blazes, which recorded for the Aristocrat label in 1947. This live performance was recorded in 1994 when McDaniel was getting on in years. Those years however just seem to fall away over the course of the performance.

What is it with playing the blues that seems to keep the years at arm's length? This is no rhetorical question in view of McDaniel's performance on the title song, where his vocal has the vigor of a man twenty five years younger and his guitar is stingingly succinct. Of course both of them stem from a lifetime's experience but that's beside the point.

McDaniel sounds as though he was given a little shot of the elixir of life before he walked out onstage on that May night in Bremen, Germany. Of course he had a crack band, which helped. But listening to the likes of "Mean Old World" which includes Tad Robinson's state of the art harmonica for company, it is apparent that they hadn't just come to play, they'd come to nail something, and with eleven inch nails.

That drive is apparent during "Route 66" in which the warhorse is invigorated; there's more empathetic guitar interplay between McDaniel and Dave Specter on the intro than is found on any number of pale blues facsimiles.There's no other way of putting it than to say that it's real. If ever there was the idea that you don't know what the blues are if you can't hear them, then this performance is the one-shot deal that gives it substance, especially when Robinson climbs aboard again and those guitars raise the spirit of T-Bone Walker three times over, just for good measure.

Roosevelt Sykes's "Everyday I Have The Blues" gets a double hip replacement too, which ensures that it gets slinky and dirty at the same time. For all of B.B. King's euphoric readings of the song this one has an edge, especially when it's replete with a solo from Specter which goes to show why he's so highly valued. To be sure, the value placed on him can also be applied without a second thought to this set.